This week’s word begins with the letter G:

The two spellings seem to be used in both the UK and the US, but the most used spelling seems to be the second one (whereas I have always used the first).

1.  Complicated or technical language that is difficult to understand, especially when used in official documents or instruction manuals.

2.  Although Meaning (1) above still remains in use, gobbledegook is sometimes used to mean simply nonsensical or silly (i.e. not necessarily jargon or pretentious wording):

Parents watched as the children played their party games, their happy chatter sounding like gobbledegook to adult ears.

Texas Congressman Maury Maverick coined the word in 1944 to describe the frustrating jargon used by policymakers in Washington. It reminded him of the sound of turkeys gobbling. 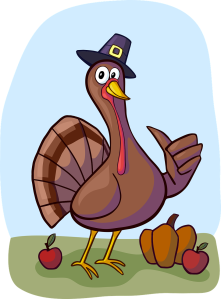 1. ‘Okay, I’ve heard enough,’ Greg said none too politely, cutting through the salesman’s jargon. ‘Forget the rest of the gobbledegook and just tell me how much the car costs.’

2. After listening to the closing speeches at the end of the trial, Monica’s head was spinning. Sifting the truth from the deluge of what sounded like gobbledegook spouted by witnesses and judges alike would not be an easy matter.