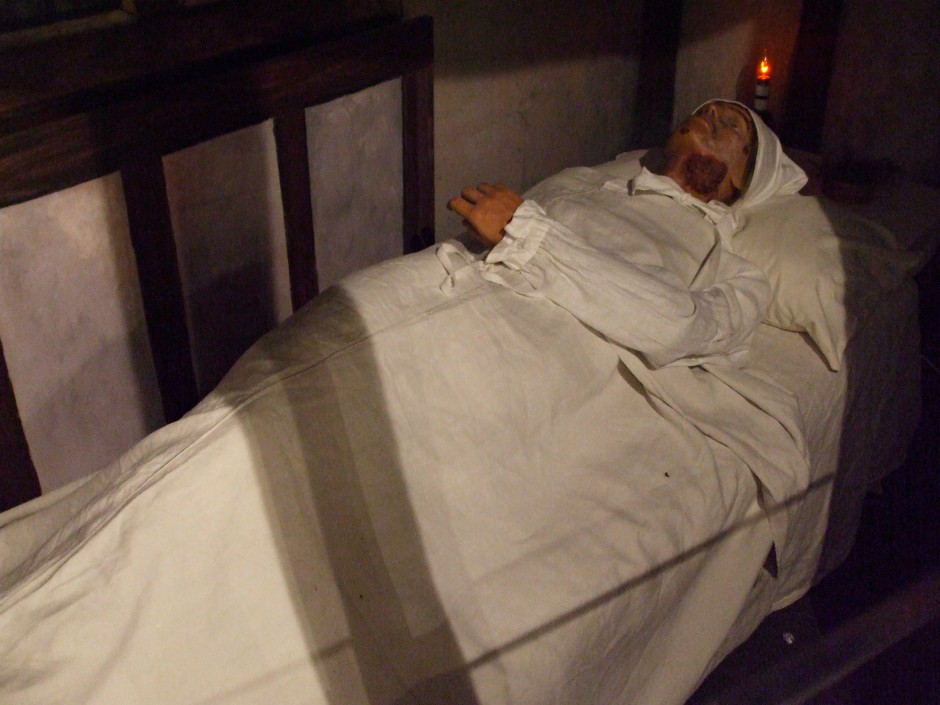 Eyam is a village in Derbyshire, U.K. and lies within the Peak District National Park: 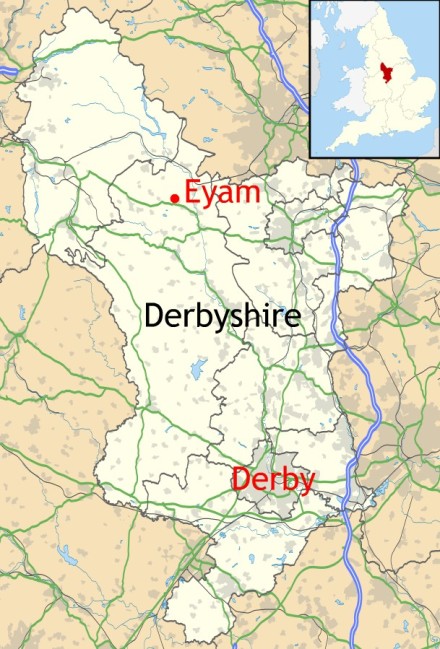 The village was founded by the Anglo-Saxons and, as in many limestone areas of the Peak District, lead had been mined in the vicinity since Roman times.  In the early and mid-17th century, the industry employed many of Eyam’s inhabitants.

Today the pretty Derbyshire village attracts visitors from around the world, not only due to its location within the National Park, but because of its fame as ‘the plague village’. In addition, hundreds of visitors flock into Derbyshire from spring to autumn each year (though not this year!) to see the fabulously ‘dressed’ wells in many of the villages, Eyam being one of them.  I did a post about Well Dressing here

The plague that hit Eyam in 1665-1666 is referred to as ‘The Great Plague’. It was not ‘The Black Death’ – the outbreak of plague that reached England in 1348. The plague that occurred in both periods was basically the same bubonic plague, the different names denoting the different times in which it struck. In the 300 years between the two, numerous other outbreaks of plague occurred across the country and some small settlements disappeared altogether.

Bubonic plague is a disease carried by several rat species, most commonly the black rat, also known as house rat or ship rat.

The fleas that live in the rat’s fur are carriers of plague bacilli and when they feed on the rodent’s blood they leave the bacilli in its body, causing rapid death. If the number of rats plummets, infected fleas will take the blood of humans or other small mammals.

In London alone in 1665-6, almost 70,000 deaths were recorded during this outbreak of plague, though it is thought the real number was closer to 100,000. Many towns and villages across England also suffered. In Eyam, 260 of the estimated population of 1,000 died.

The plague in Eyam is believed to have been caused by fleas that had got inside a bale of cloth brought to Eyam from London for a travelling tailor’s assistant named George Viccars who was lodging with Mary Hadfield and her family. When he unfolded the cloth it was damp, so he laid it out to dry – and the plague-carrying fleas jumped out. 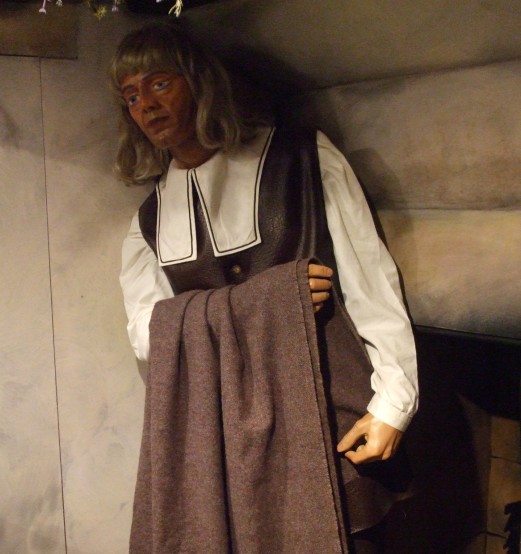 George became the first man to die of the bubonic plague in Eyam. More deaths soon followed and within days, the disease had spread through the village, affecting many households.

The most well-known effect of bubonic plague are the buboes, the massive, tender swellings which form in the lymph nodes, generally in the armpits or groin:

There are various other effects, too – fever, vomiting, headaches and delirium being just a few of them. The lungs can also become infected, causing pneumonic plague. This is less common but much more dangerous, due to the ease in which it can spread through sneezing. A third form of the disease is believed to be septicaemic plague, a life-threatening infection of the blood.

Having no scientific knowledge enabling them to account for the outbreak of the plague, to the villagers the disease could only be explained in religious or supernatural terms. The wrath of God inflicted upon sinful people could only be pacified by prayer and repentance. Many devout villagers refused to take preventative measures for fear of angering God further. Others relied on herbal and other age-old remedies. Between the September and December in 1665, 42 villagers died.

There is no record of how many villagers actually left Eyam and it is now believed the number was higher than originally thought. But it is known that most were wealthy landowners and mine owners – all of whom would have had somewhere else to go. 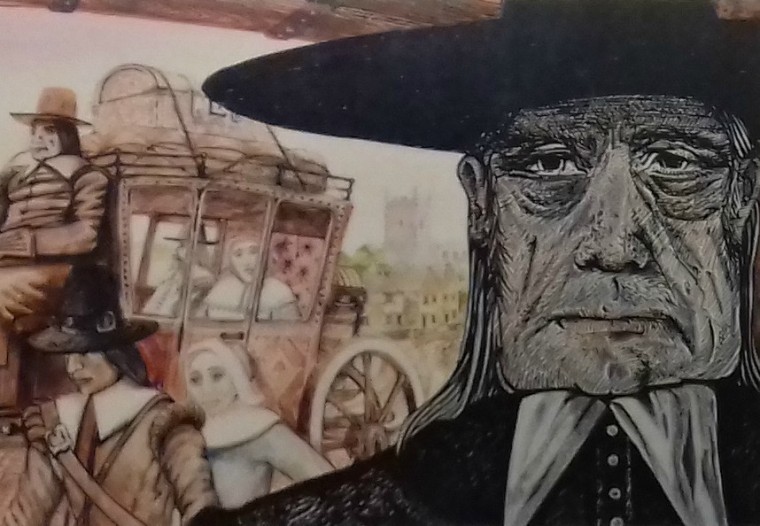 A few families sent just their children away to safety, as did William Mompesson, the recently elected reverend, and his wife, Catherine: 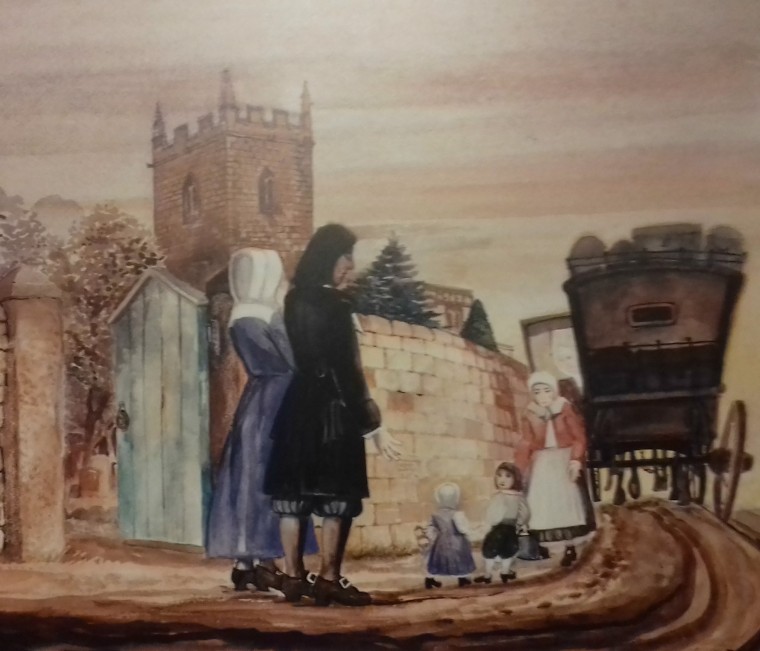 Few of the poorer, tenant farmers and labourers could abandon their livelihoods and just pack up and leave, but in a bid to escape almost certain death, a few  poor people chose to try their luck elsewhere. Some built makeshift homes on nearby Eyam Moor or in fields or on hillsides. 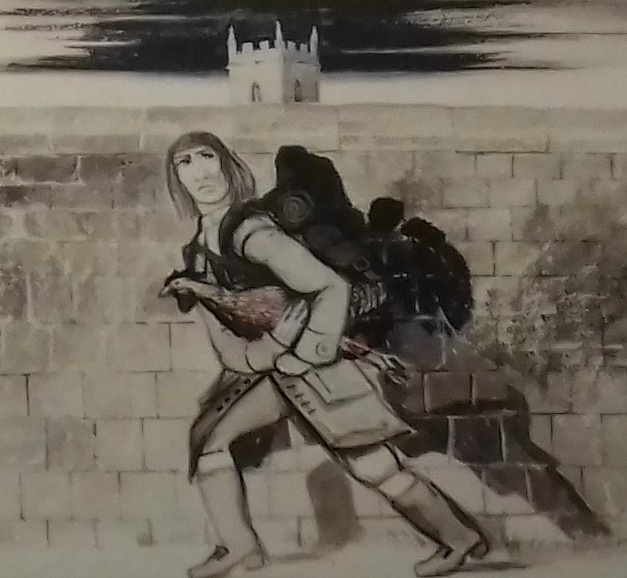 There is also plenty of evidence of poorer refugees of the plague being barred or violently driven away from their chosen places of refuge. The people of the city of Sheffield, approximately 15 miles away, erected barriers and posted guards. The picture below shows an Eyam woman being chased out of the nearby village of Tideswell as she attempted to mingle unnoticed with shoppers at the market.

Mortality rates over the winter 1665-66 saw a drop, primarily due to the rats nesting in warm places like thatches on the roofs. There would also be ample foods for the rats in the unhygienic homes of the times. Comfortable, warm rats would provide plenty of food for the fleas, so they would have no need to seek out alternative sources of blood.

Nevertheless, death rates were still well above the normal winter average, and since the villagers knew that plague was a summer disease, the number of deaths was expected to increase with the rise in temperatures in the spring of 1666. After a slight lull in casualties in the May, a sudden and dramatic increase occurred in June, and it became clear to the newly appointed reverend, William Mompesson, that something needed to be done. Together with a former rector of Eyam, Stanley Thomas, a three-fold plan was devised.

Firstly, there would be no more organised funerals and church burials. Families would be responsible for burying their own dead in their gardens, orchards or fields.

Secondly, the church would be locked and future services held in the open air. 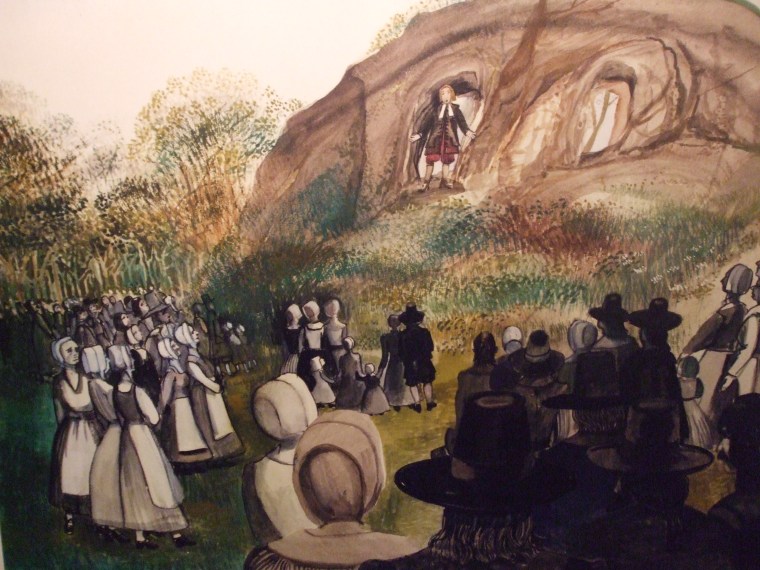 The third part of the plan was the greatest and toughest of them. A ‘cordon sanitaire’ would be imposed around the village in an attempt to stop the disease spreading further afield. In other words, the village would be quarantined – a condition to which all villagers needed to give their consent. Quarantine would mean that, shut away from the world, many people in the village would meet the inevitable end.

Mompesson promised to do all in his power to get essential foods and medications into the village. A boundary stone was erected, separating Eyam from the nearby village of Stoney Middleton. The stone had specially made holes in its top, which were filled with vinegar, which acted as a disinfectant.  Eyam villagers could put their money into these holes in exchange for supplies. The stone is still in its original place today and visitors can find it by following the signs around the village.

In addition, in exchange for their promise of obeying the cordon, the Earl of Devonshire from nearby Chatsworth House, freely donated foods and medications to the people of Eyam. These were left at a place known as Mompesson’s Well.

The highest number of deaths was recorded in August 1666, as many as 5 or 6 deaths per day. In the heat of the summer, the fleas were more active and the disease rapidly spread. Households became deserted, communal tasks left unfinished and cattle wandered unattended. Nevertheless, few people attempted to leave (only 2 known). Elizabeth Hancock buried her husband and six of her children, though she remained unaffected herself. Their graves are known as the Riley Graves, after the name of the farm on which they lived.  Like the boundary stone, these graves can be visited today.

William Mompesson’s wife, Catherine, worked tirelessly, visiting the sick until falling victim to the plague herself in late August, 1666.  Her tomb can be seen in the churchyard.

By Christmas 1666, after 14 months and the deaths of 260 people, it was all over. Life in the village slowly began to return to normal. In an effort to stop further outbreak of the pestilence the following summer, there was ‘a great burning’ of everything in Eyam that could have harboured the ‘plague seeds’. Mompesson set the example by burning everything of his own except the clothes he was wearing. 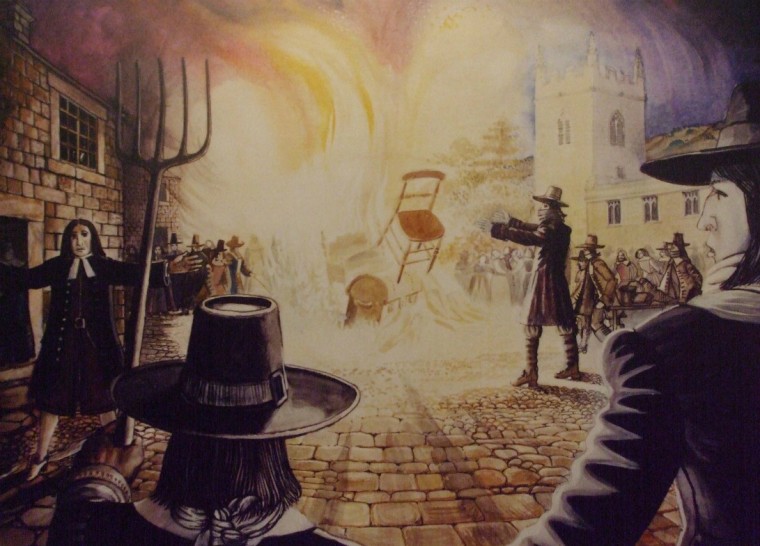 To finish with, here a few photos we took around the village. With the exception of the one buboes (which is from Wikipedia) those shown above were all taken in the little Eyam Museum, which is well worth a visit.

Also of interest, with plenty of information about the Great Plague at Eyam, are Saint Lawrence’s Church, and the Plague Cottages.  Eyam Hall – which is a 17th century, grade 2 listed historic house – is also well worth a visit. In the churchyard are Catherine Mompesson’s tomb and a fabulous Anglo-Saxon Cross dating from the 8th-9th century. 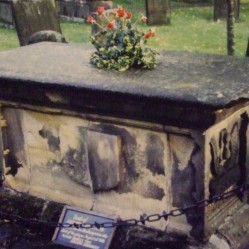 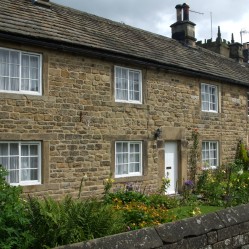 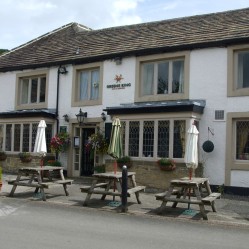 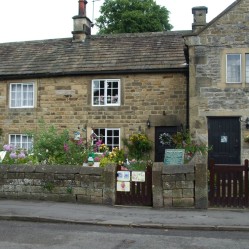 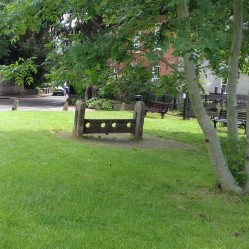 Inside the church, there is a famous stained glass window depicting scenes connected to the plague and a record of those who died from the disease. 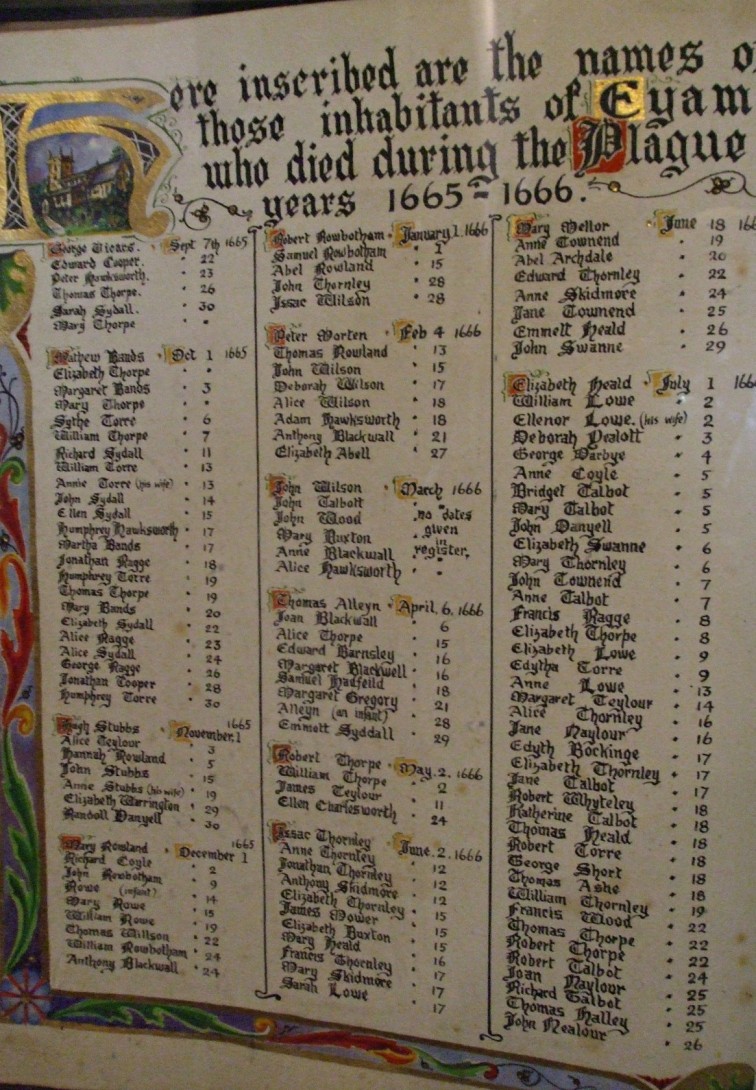 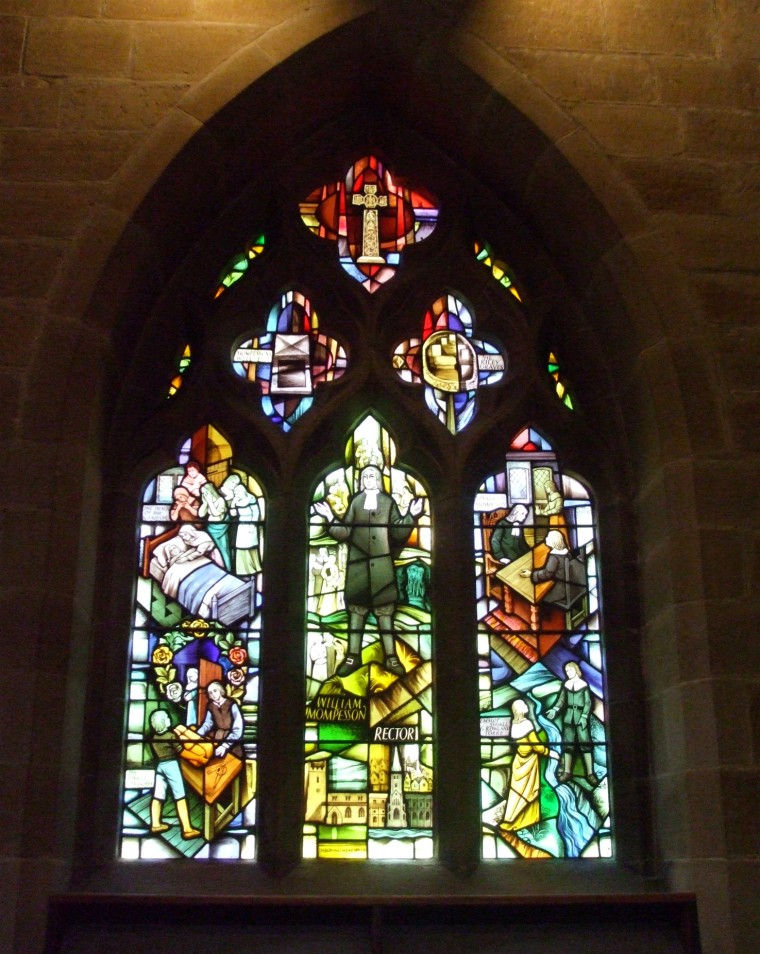 13 thoughts on “The Plague Village of Eyam”