Last Sunday, July 16th, we headed into rural Lincolnshire to the village of Woodhall Spa, considered to be one of Lincolnshire’s most attractive villages. It has an Edwardian character and is set in lovely pine woods. From our Nottinghamshire village on the Notts-Lincs border, we had a drive of 27 miles. I won’t go into the history of Woodhall Spa on this occasion, but yes, it was a spa town in the past. Its history during WW2 is also interesting. Like so many places in ‘flat’ Lincolnshire on the eastern side of the country, it was once an RAF base. (The pine woods were of utmost importance for concealing aircraft and ammunition supplies and such like).

Woodhall Spa’s 40’s Festival is a free event – meaning there are no entry fees –  run entirely by volunteers and held over both days of the weekend: July 15 and 16 this year. It aims to spotlight ‘Life on the British Home Front’ i.e. Britain during WW2 – and it delivers on every count. This was the festival’s 6th year and its popularity has grown so much it has become one of Lincolnshire’s most popular attractions. 2016 saw 40,000 visitors over the weekend and this year it rose to 45, 000.

A wide variety of events take place at various areas of the village. A number of living history groups /re-enactors are involved and there are outdoor concerts and live music. Vera Lynn songs blasted out from one area, Glenn Miller music, and Scottish pipers from others. People danced and got into the spirit of the occasion whilst others watched and clapped: 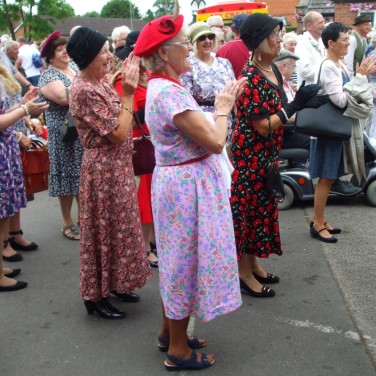 A group of older women appreciate the Glenn Miller music and dancing. 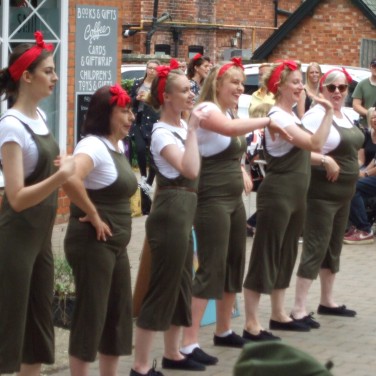 ‘Land girls’ entertain with a dance or two 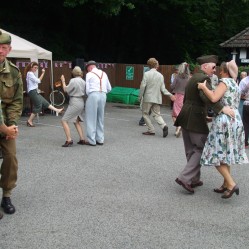 Spectators don’t seem to be able to stand still!

Food and drink stalls were everywhere, including a few ice-cream vans. Of course, I just had to have a nice big cone! (What else are days out for, when all’s said and done?)

There were several little cafés, as well as pubs and hotels offering meals to suit all tastes. And before I plough on, I have to say that dressing in 40’s costume is encouraged. Next year, we may well do what the organisers suggest and take ourselves off to a charity shop, or suchlike, and grab some 40s gear! This smiling young lady looked lovely in her ‘get up’: 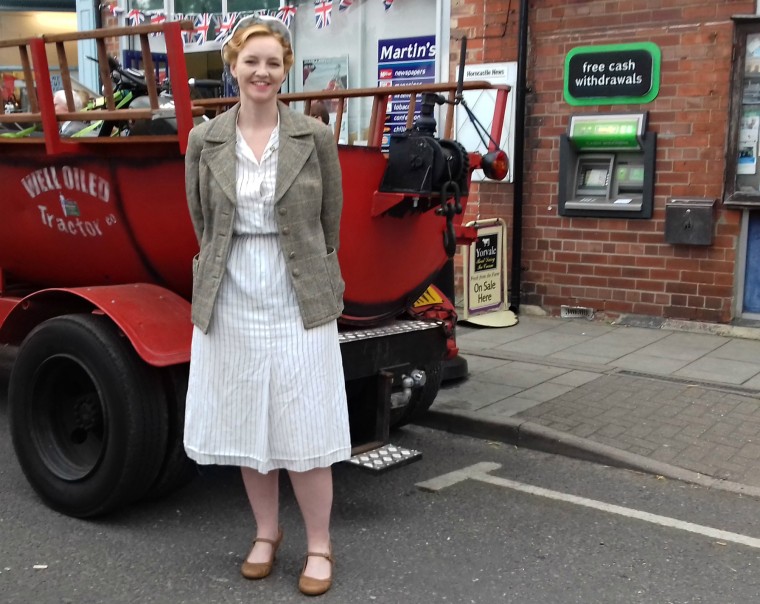 One of the first things to watch was the parade, primarily (re-enactors) of 1940s servicemen, as well as military vehicles from a variety of living history groups. 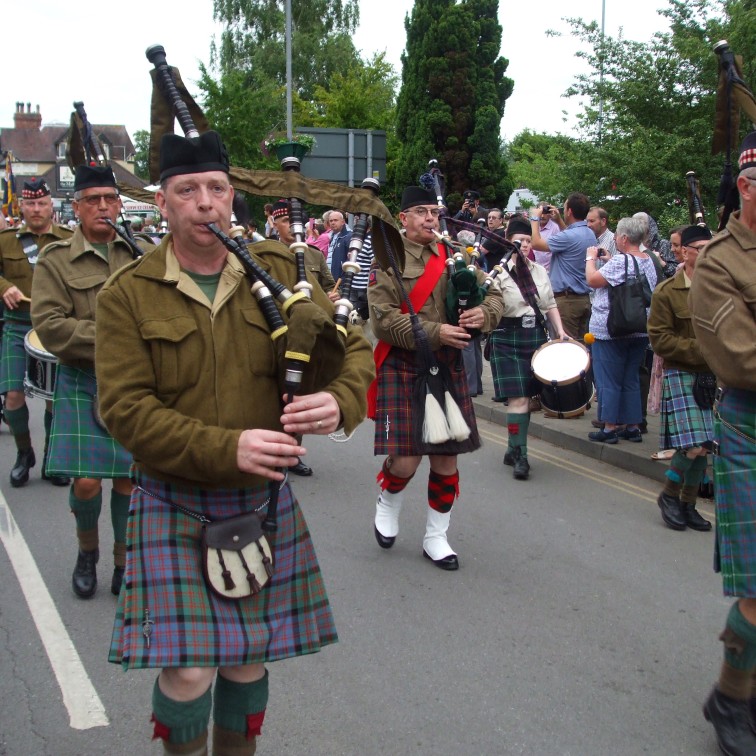 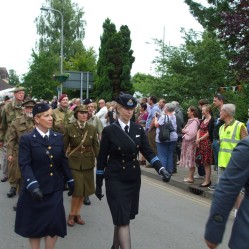 Along the village streets were so many vintage cars, motorbikes and military vehicles, I had a hard job moving (husband) Nick along to look at other attractions!  He was totally besotted with the old motorbikes in particular. These are a photos of just a few of  the  many vehicles: 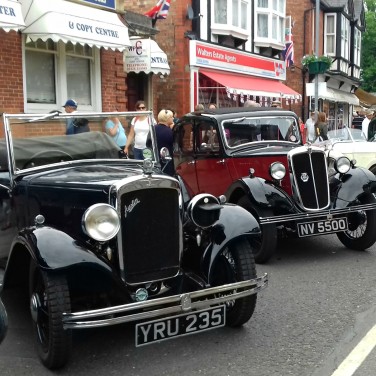 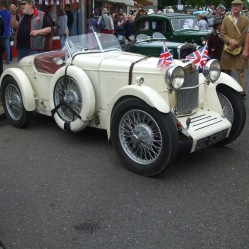 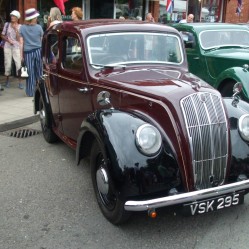 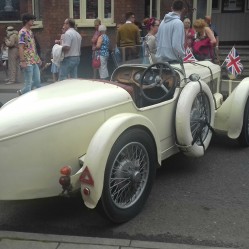 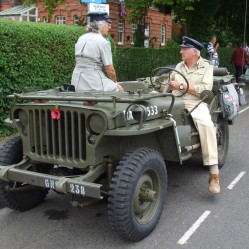 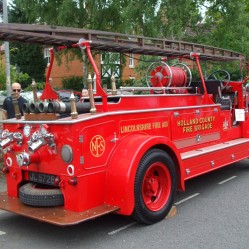 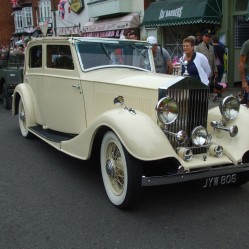 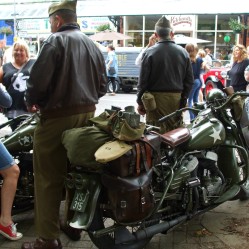 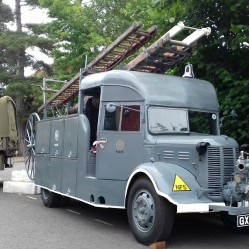 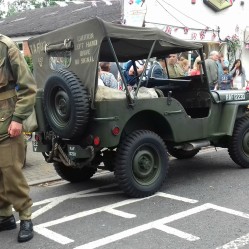 Visitors in 1940s dress really made the day. They brought the whole 40s theme to life. Here are some photos of a few of the many people we passed on our walk about. Re-enactors mingled with the crowds, so  it wasn’t easy to differentiate between the two! 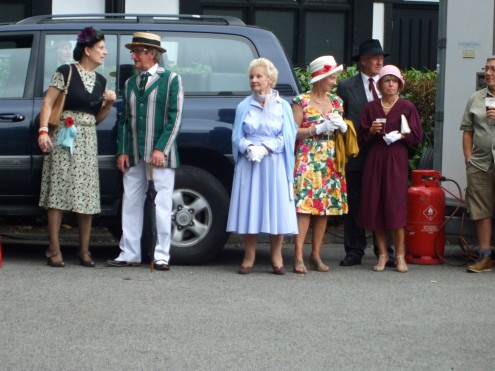 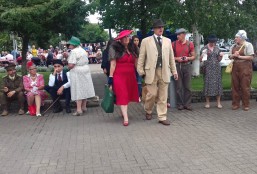 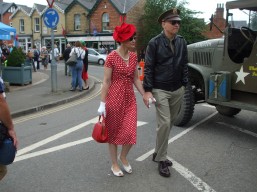 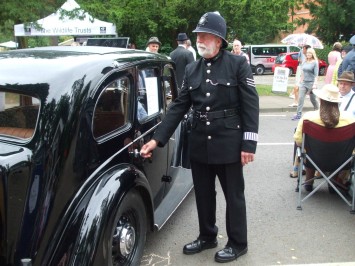 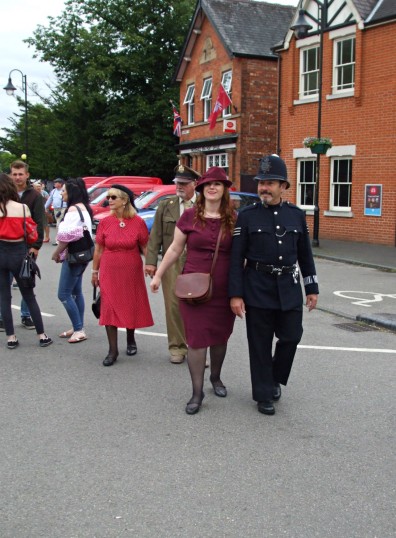 Even Poirot gets into the scene!

And this was a regular sight up and down the main street. One way of getting around to the various  parts of the village:

And to add to the authenticity of the event was the fly-past of Spitfires and Hurricanes from RAF Coningsby, less than 5 miles from Woodhall Spa, and home to the Battle of Britain Memorial Flight. Nick assures me the Hurricanes are the ones with more rounded-tipped wings, so I’ll take his word on that. It was overcast and grey as they flew over, as the photos show:

I later learned that a Lancaster bomber also flew over. We left about 3 pm, having been there since 10 am, and the Lancaster obviously graced the skies later than that. I was disappointed to know we missed it, but, when all’s said and done, I’ve seen Lancasters flying over this area before, so I shouldn’t moan. We’d had a lovely day out and, other than a few spits of rain in the morning, the day was fine. Still, some sunshine would have been nice… 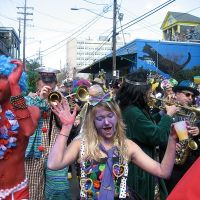 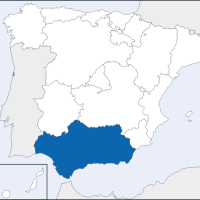 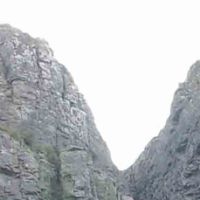