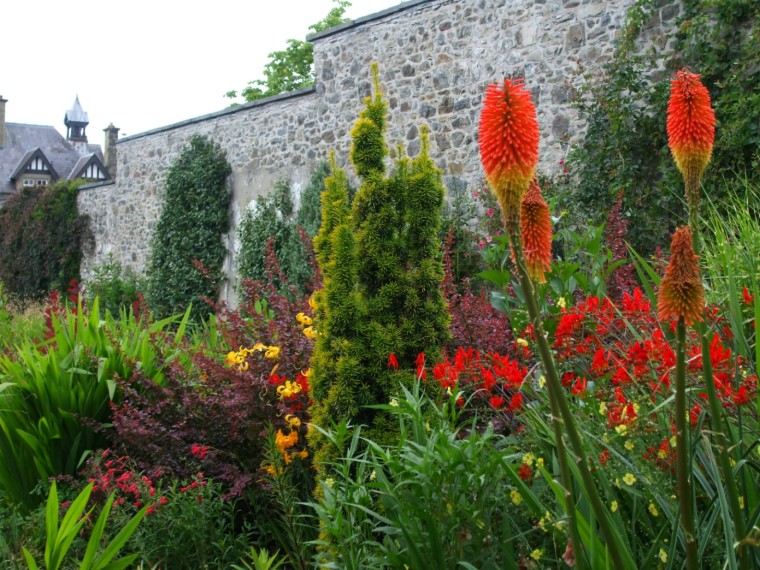 Bodnant is a world famous garden, situated in the county borough of Conwy in North Wales, with wonderful views of the Conwy Valley and the Carneddau Mountains of Snowdonia. It is owned by the National Trust and visited by 190,000 people every year. 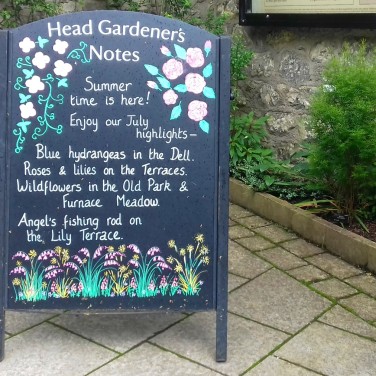 Bodnant is a perfect place to visit at any time of year – as my aunt and uncle, who live almost on its doorstep, will confirm. It’s open for 362 days every year, closing only on Christmas Eve, Christmas Day and Boxing Day. The 80 acre garden is magnificent and has become a perfect venue for weddings. It is “home to the National Collection of Champion Trees”.

Yet there’s much more to Bodnant than trees.

The last time we visited Bodnant was on a lovely sunny day in early June, 2015. Due to my aunt’s mobility problems at that time, we stayed in the Upper Gardens, close to the Entrance and Garden Centre, as well as Bodnant Hall (which I’ll say more about later on). There’s plenty to see in this area alone, without heading down into The Dell (valley), including the Italianate Terraces and the many shrub borders edging the pathways and expansive lawns. The famous Laburnum Arch is also in the Upper Garden – which we were fortunate to see in flower in June 2015. Delightful ponds add to the tranquility of the setting. Roses of all descriptions were also in bloom in June 2015, so in late July this year we were treated to completely different displays of foliage and colour: 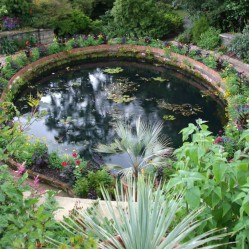 This fabulous garden was founded in 1874 when Leicestershire man, Henry Davis Pochin, bought the estate. He employed a local apprentice named Edward Milner and together they landscaped the hills and valley and planted American and Asian conifers on the banks of the River Hiraethlyn. The stream banks were reinforced to create woodland and water gardens and there is an unusual bridge across the stream called Waterfall Bridge: 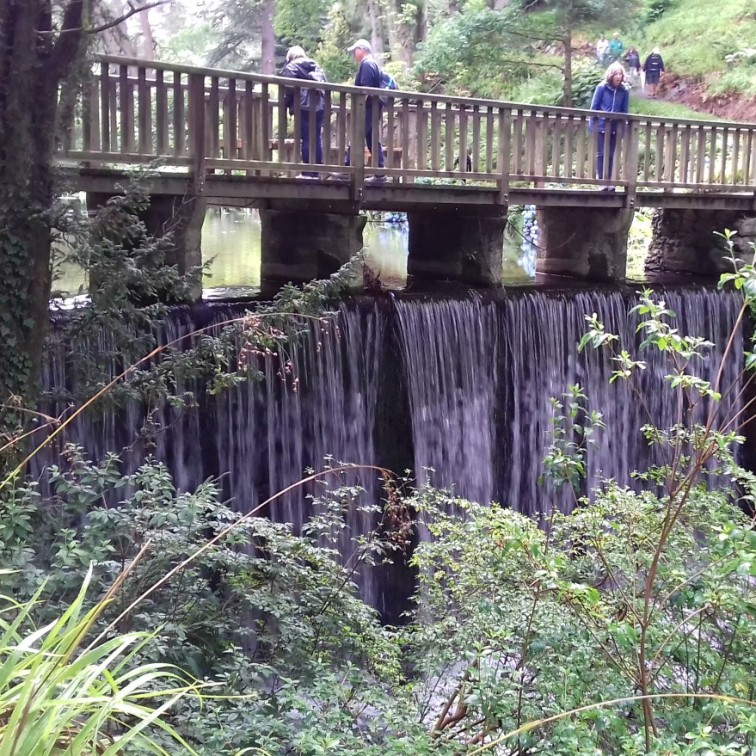 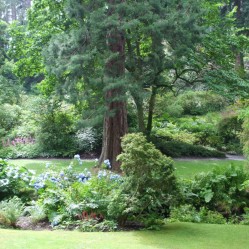 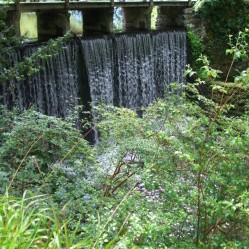 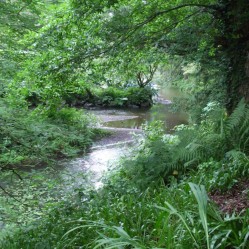 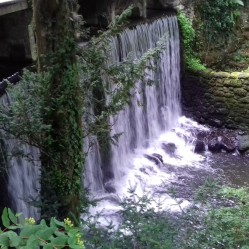 Pochin’s daughter, Laura, married Charles Mclaren, the First Baron of Aberconway, and the Hall has been in that family ever since. It took successive generations of the Mclaren family to create Bodnant as we see it today, and although the gardens were given to the National Trust in 1949, the Hall remains the possession of the present Lord Aberconway and is not open to the public. However, Lord Aberconway and his family are still actively involved in the Garden’s management and improvement. 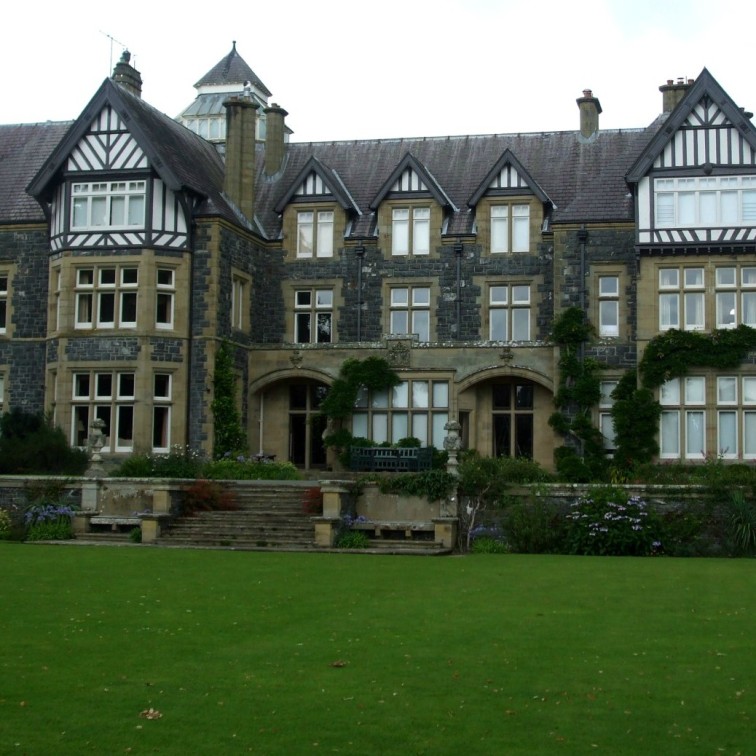 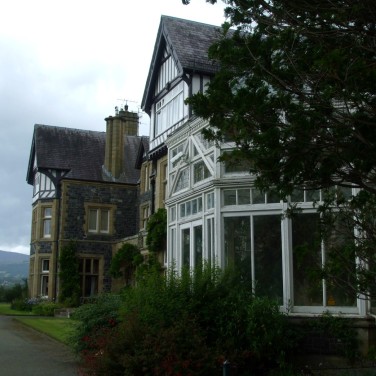 On our way down to The Dell it started to rain (no surprise there!) so we spent a while sheltering under the trees. But we still had some great views of the Old Mill: 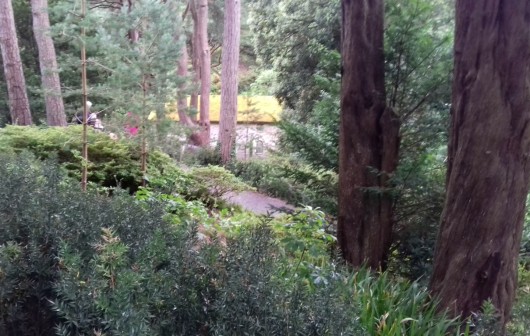 At the furthest end of the valley, and Bodnant as a whole, is a large pond called the Skating Pond. I can only imagine it got its name because it froze over in winter and was used (literally) as a skating pond. But it’s a pretty pond anyway, with a boat house to one side and edged by trees, including a few huge willows.

Car parking at Bodnant is across the road, but pedestrians reach the gardens via an underpass. There are four places at which to find refreshments. One of the cafes, which serves actual meals, is next to the car park and one that serves snacks and sandwiches is by the Entrance. The other two small places for light snacks and drinks are down in the Dell – one close to the Old Mill and another, which we’ve never used, is by the Skating Lake.

To finish with, this is a photo of the famous Laburnum Arch. If you want to see it in flower like this, June is the time to visit. 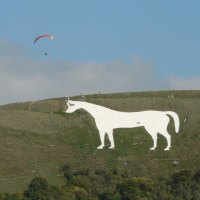