On Saturday I went into Nottingham with my elder daughter, Nicola, and grandson Kieran, to do some Christmas shopping. We went on the train – just to keep my train-mad grandson happy – and were out all day, not getting home until the evening. As you can see from the photo above, it poured down for most of the day, so we did spend more time than we’d have liked mooching around inside the shops.

Nottingham is a big city with a history that goes back hundreds of years. It is known worldwide mostly for its connections with the Robin Hood stories, but there’s a lot more to Nottingham than that, and I’ll probably do a post about it sometime next year.

For now I’ll just share some of the photos I took of the Old Market Square, and give you a little bit of information about it:

In the days before the City of Nottingham existed as such, the area which is now the Market Square was the centre-point between two Anglo Saxon towns in the old kingdom of Mercia. One of these towns was Snotengaham (also called Snothryngham, Snottingaham and – the usual name around here – just Snottingham). Whichever name is used, it simply means ‘the settlement of Snot’s people’ – to most people’s amusement.  So the central area between these two settlements has been the centre of the city’s growth for hundreds of years.

The Old Market Square, as it is known, is an open, pedestrianised area, from which shopping streets spread out in all directions. It’s a place where friends can meet and do some shopping, or visit one of the many cafes, restaurants and pubs. It is the largest public space in the U.K. after Trafalgar Square in London and is a centre for Nottingham’s transport links. Trams run around the outer edge of the square, as can be see from the overhead lines in a photo of the Council House lower down the page. Unfortunately the only photo I took of a tram is not a good one, particularly as people stepped in front of me as I snapped it. Here it is anyway: 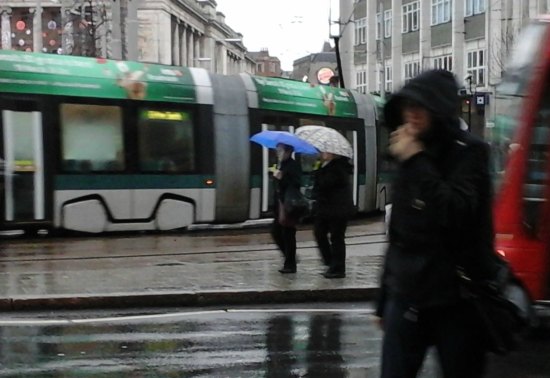 In summer for several years now, a large area of the square has been converted into an artificial, sandy beach for parents to take their children to play on, with a huge paddling pool in the middle – an excellent idea for a ‘Midlands’ city, a long way from the coast. The square was also the original site for Nottingham’s famous Goose Fair, which originated over 700 years ago and is held every October. In 1928, the fair was moved for redevelopment of the square and is now held on the Forest Recreation Ground, an open space about a mile north of the city centre.

The Bell Inn, thought to be one of the UK’s oldest pubs and dating back to around 1276, can also be seen at the back of the square. I forgot to take a photo of it as we dodged the rain, so here’s a (summertime) photo from Wikipedia:

But the building that dominates the square, although undoubtedly impressive, is nowhere near as old as the Bell Inn. This is the Nottingham Council House building as seen on my ‘header’ image and this one below. It was built to replace two much older buildings that had been used for this purpose over the years – the old Norman ‘Moot Hall’ and the English Guildhall, last used in 1877.

This new Council House was designed by Nottinghamshire architect T. Cecil Howitt and a building called ‘The Exchange’ was demolished in 1926 to accommodate it. In 1929, thousands of people gathered to watch its official opening in by the Prince of Wales, who later became King Edward VIII, open the great doors with a golden key, which is still displayed on a wall plaque, just inside the building to the left of the grand staircase.

Unlike the Lincoln Christmas Market, held only over a long weekend, Nottingham’s is held throughout December. Like several others in the U.K. nowadays, it is also fashioned after the German markets, although Lincoln was the first in the country to do so. Still, it all looked very pretty, with a little fun fair and lit-up stalls – despite the rain. 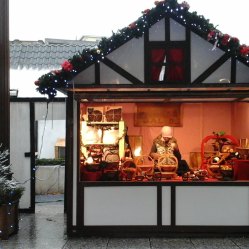 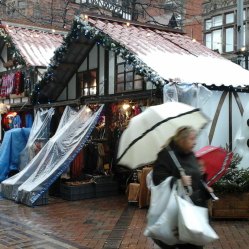 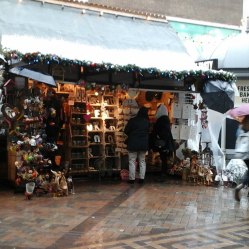 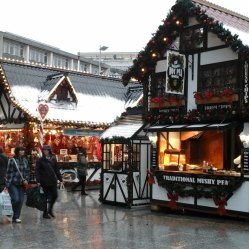 Lincoln Christmas Market, however, has the great advantage of its wonderful setting in the castle bailey and being overlooked by the beautiful, towering medieval cathedral. It draws people back, year after year.

99 thoughts on “Christmassy Nottingham In The Rain!”