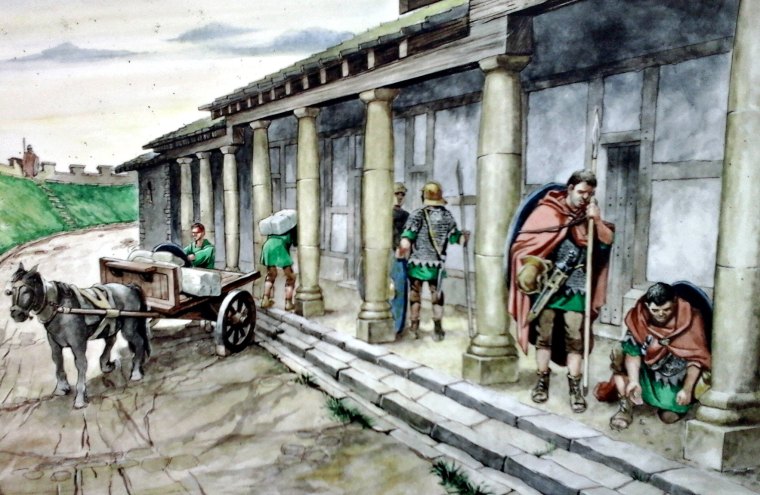 Housesteads Fort (Roman name Vercovicium) is a wonderful place to visit for its location and views alone but it’s also the best preserved of all the forts along the Wall. It’s a World Heritage Site and is owned by the National Trust and managed by English Heritage.

Housesteads is roughly half way along Hadrian’s Wall and is one of sixteen forts that housed around 10,000 men between them. Archaeologists believe that the original plan for Hadrian’s Wall did not include forts, as several (like Vindolanda) were already garrisoned along the Stanegate Road a mile or so south. The first plan had only manned milecastles and turrets at regular intervals. Once work started, around AD 124, plans changed and a recently built turret was demolished to make way for this fort, the remains of which can still be seen today.

The fort sits high on the escarpment of the Whin Sill ridge on the dip slope to the south of the Wall. At the bottom of the slope is the entrance to the site and where the visitor centre and main car park are located. 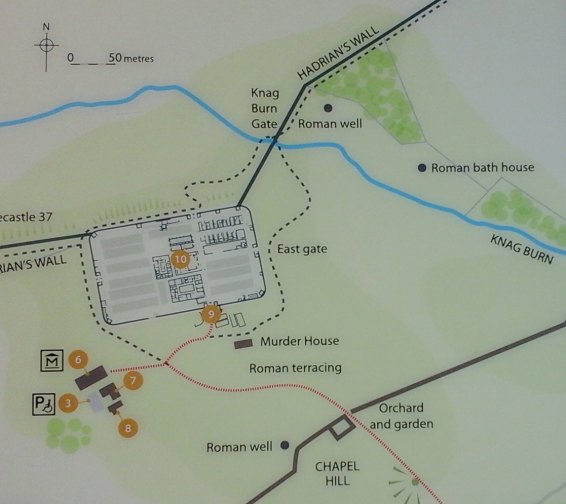 The map above is from an information board at the site. It shows the immediate location of the fort, the area to the south of it and the path along which visitors walk up to the fort from the entrance. Disabled visitors can drive further up to the disabled parking area (marked 3 on the map). The other numbered buildings are the little museum (6) activity centre (7) and a holiday cottage (8). The general car park, visitor centre and food and drinks kiosk are a little outside this section of the map. (10) refers to the fort and (9) is the vicus (civilian settlement).

The photo below shows part of the same area, looking south from the fort to part-way down the hill. Some of the ruins of the vicus can be seen in the foreground.

Looking north from the fort there are views down to the Knag Burn Gate (just visible in the photo in middle of the stretch of wall after the bend where the people are walking). It is thought that this was inserted in the fourth century, possibly to allow easier passage through the Wall. Gates at either end of the passage suggest that travellers were held inside and searched. Open Northumbrian countryside stretches out beyond the photo and on to the Tyne Valley and Scottish borders.

Houseteads has the usual, playing card shape of all Roman forts, its northern side lying along the Wall itself. To the south are the ruins of the vicus. During excavations there in 1932, two skeletons were found beneath a newly laid floor. One, a man, had a sword still embedded in the ribs. The cause of death of the woman with him is unknown. Needless to say, the house has since been called the ‘Murder House’.

In the centre of the fort are the main buildings. The most central one is the Headquarters, or Principia – the administrative, ceremonial and symbolic heart of the fort. 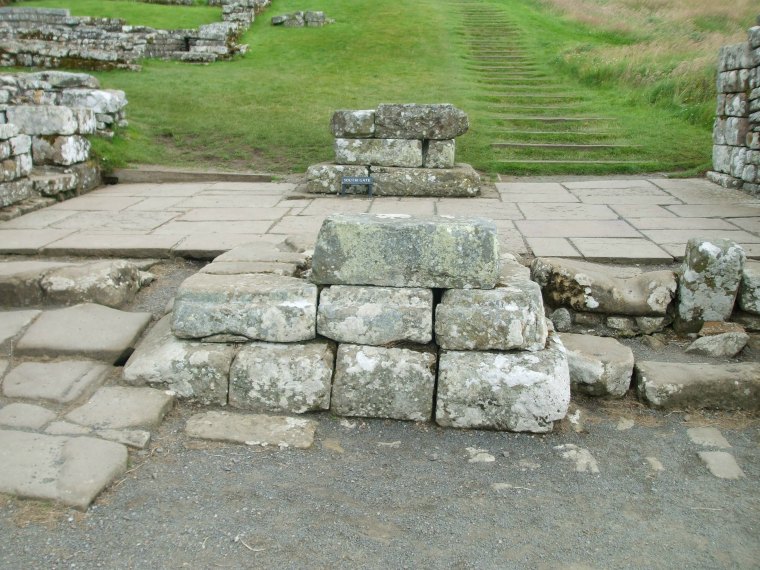 It faced the east gate and sat at the junction of the major roads from the gateways.

Next to that, on the southern side (right in the diagram immediately above) is the Praetorium or Commanding Officer’s House, with its central courtyard. The Commander lived in style and entertained a lot! 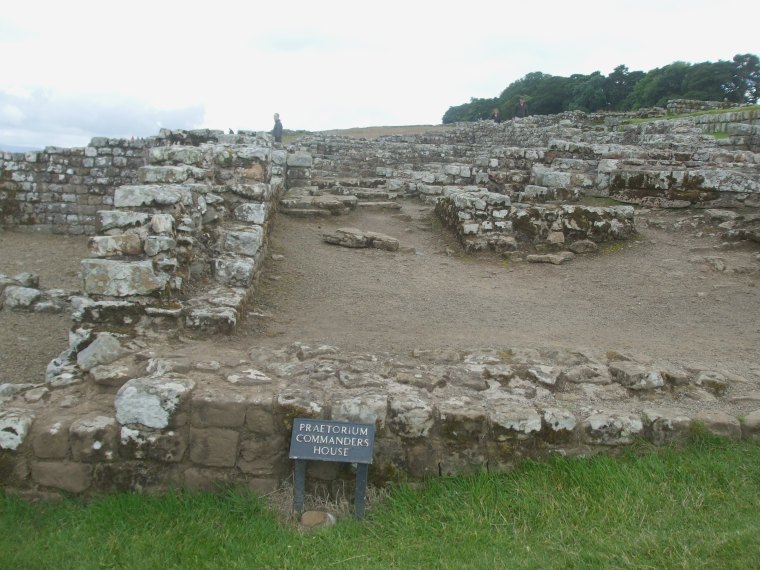 At the opposite side of the HQ building are the usual granaries – vital to the feeding of the garrison. The impressive system of underfloor heating/ventilation can still be seen. 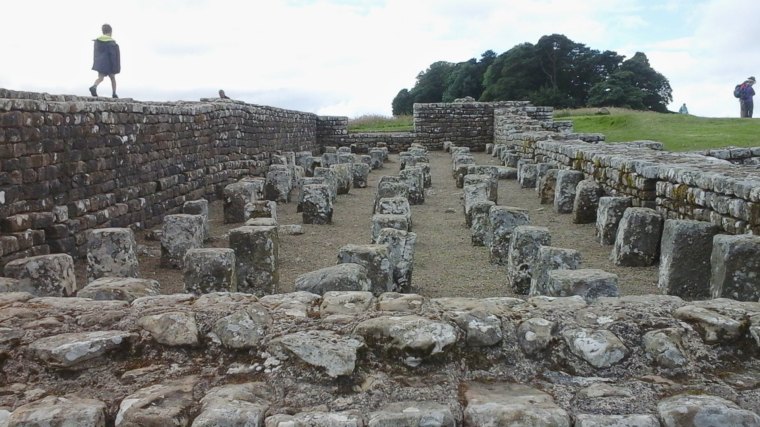 Another point of interest is that Housesteads had its own hospital with what archaeologists believe to be evidence of an operating theatre. On the above plan, the hospital sits behind (west) of the HQ building.

Either side of this important central area were the soldiers’ barracks, the stables and workshops. My ‘header’ image is an artist’s impression, from an information board at the site, of the outside of a barracks block. This is what they look like today: 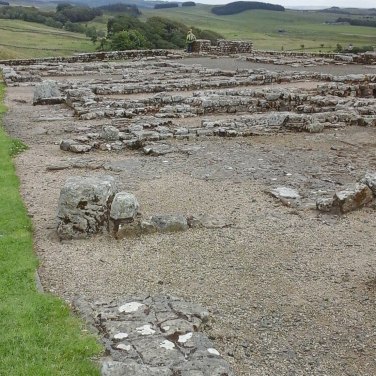 Other buildings included stables and workshops – and in the far south-east corner, the lowest point in the fort, is an impressive latrine! For eight years on the trot of going with the school to Housesteads, I seemed to land the roll of ‘Toilet Attendant’! I would stand up there while groups of about fifteen students at a time gathered round to listen to me deliver my spiel.

As archaeological evidence, I must admit, the Housetseads latrine is fascinating. Here are a couple of photos of what can be seen today:

Yes, the latrine was what we would call a communal loo! The men would sit along either side (it could take about a dozen men each side) and do whatever they came to do whilst enjoying friendly banter with their mates. They could have been discussing the ‘son of a bitch’ centurion, or perhaps bemoaning the rigorous daily training expected of them – or even a recent barbarian attack. The question which generally came as one of the first from the students was ‘What did they use for loo roll?”

Well, take a look at these artist’s impressions of what the latrine would have looked like: 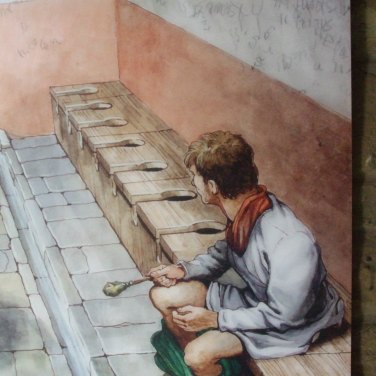 For starters, it wasn’t an open-air venue and secondly, the men are not holding lollipops. Those items are simply referred to as ‘a sponges on sticks’ (although I imagine the Romans had other names for them). The drainage channels in front of them are where the sponges were put after use – ready for the next person who needed one. Who needs loo roll, when you can use one of those?

However, there is no evidence that ‘sponges on sticks’ were ever used in Britain. The artist’s impression above is based on evidence from Roman latrines around the Mediterranean. It could be that Romans in Britain used the same ‘toiletries’ as the rest of the ‘barbarians’ – grass, bracken or moss.

Beneath the wooden seats were sewers for the waste, which was flushed away through a conduit to the hillside below. Tanks to collect rainwater stood around the fort, as there was no running water inside. This tank stands outside the latrine, one of several that would have provided water for the sewage system. It can also be seen on the first photo of the latrines above:

After AD 300 major changes were made to the fort, possibly linked to the way in which the Roman Army was now organised. The old barracks – which housed a century of men (i.e. 80) in ten compartments – were demolished and replaced by chalets for individual soldiers, suggesting that the numbers of men stationed there were declining. The west gate was blocked with stone and in the fourth century, a new bath house was built inside the fort and the isolated, outer one abandoned, suggesting that the security of soldiers may have been a concern.

By AD 410,the Roman Army had been withdrawn from Britain, leaving these islands wide open for attacks from peoples from continental Europe: Angles, Saxons, Jutes, Frisians and a few hundred years later, Danish and Norwegian Vikings. And last but not least were the Normans in 1066.

Some of he many ‘finds’ from Houseteads can be seen in the little museum. Others are housed at the museum at Chesters Roman fort further east, and others at the Museum of Antiquites in Newcastle. 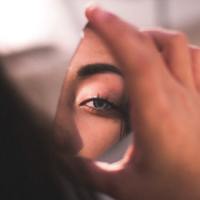 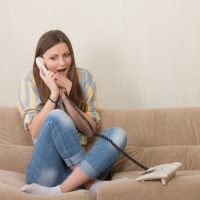 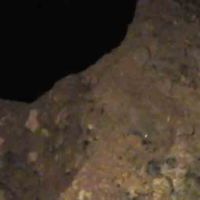