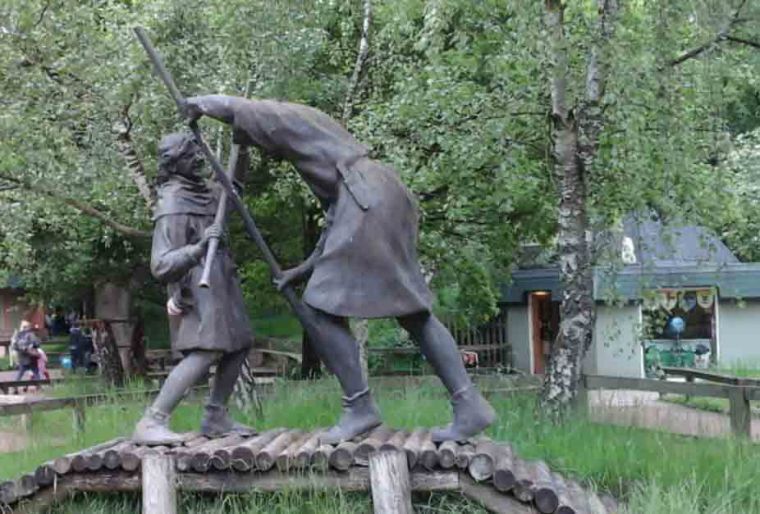 Last Monday was a Bank Holiday in the UK and Nick and I, with our two daughters, Nicola and Louise, and grandson, Kieran, headed off to Sherwood Forest – about 27 miles away from where we live. Several events and activities are held at Sherwood during the year, some with historical themes, others with environmental or conservational ones. This weekend’s events were all distinctly historical, involving encampments and displays, and a number of short re-enactments from various groups. But I can’t bring myself to write a post about the events without first adding some information about this lovely forest – or what’s left of it – today.

Sherwood Forest is located at Edwinstowe in the county of Nottinghamshire, 17 miles north of Nottingham. It was once an area of woodland and heath that covered 100,000 acres (156 square miles), amounting to one fifth of Nottinghamshire. It was first established as a royal hunting preserve in the 10th century, the remnants of which later became known as Birklands (originally burchlands) – so named after the birch trees growing there.

This map from Wikipedia shows the locations of some of the major royal forests in 13th century England:

Throughout the centuries, these expanses of forest became dangerous places to enter. Not only were wild boar living in there, but outlaws gathered in their depths to keep out of the way of capture – which would mean hanging, or mutilation of some sort, for their crimes. (The word, ‘outlaw’ is simply derived from the idea of people living ‘outside the law’.)

The Great North Road (the main London-Scotland road) ran through Sherwood Forest and control of it during the Civil War became imperative to both sides. Later, in the 18th and 19th centuries in particular, highwaymen hid in the trees, waiting for travellers and making it a perilous route. (One of the encampments over the weekend belonged to a gang of highwaymen.)

Sherwood Forest is now a 450 acre Country Park, with a fascinating ecosystem – and a host of environmental/protected site designations. It is a Grade 1 site for ancient woodland and heathland, an SSSI (Site of Special Scientific Interest) an NRA (National Nature Reserve) and an SAC (Special Area of Conservation). Entry to Sherwood Forest is free, but there is a car parking fee of £3 – which can be reclaimed on purchase in the café or in the visitor centre/gift shop (where you can buy a great bow and arrow to play with or a nice green hat with a feather in it to wear.)

Sherwood Forest is best known for its associations with one of the best known outlaws of medieval times: Robin Hood (or Robin Hode) . . .

Robin Hood/Robert of Loxley was a late-12th century outlaw who ‘robbed the rich to give to the poor’. Actually who this character was has been the subject of many long debates. He has been linked to the Green Man, Jack of the Green and Herne the Hunter (who could be all the same character) amongst others, and I do intend to do a post about all this at some stage. Robin’s story has been changed and added to over the centuries, but the basic storyline stays the same. It has become particularly well-known over the last century due to the many films and TV series about him. At the exit to the Robin Hood Exhibition there is a wall display showing some of these productions:

And these are just a few of the scenes actually inside the Exhibition: 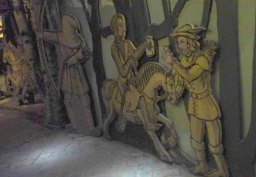 Sherwood attracts between 360, 000 and one million visitors per year, many of them from other countries. Each year, the reserve hosts the week-long Robin Hood Festival – a great event with a really medieval atmosphere and featuring the main characters from the Robin Hood legend. Entertainments include jousters, and players, plus a medieval encampment with jesters, musicians, rat catchers, alchemists and fire eaters.

But visitors also come to Sherwood throughout the year to visit the Forest itself. There are over 900 ‘veteran’ oak trees here, including England’s Tree of the Year for 2014, The Major Oak – which is a pedunculate or English common oak.  Naturally, other species grow here, too – birch being the predominant one. First, here are a few photos of the forest, including some of the many old oaks and some of the wood carvings dotted along the paths. I have to admit that the first tree in the gallery is my favourite. Look at those big, brawny arms – although he is rather two-faced, don’t you think . . . ? 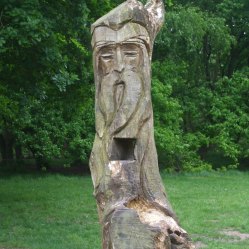 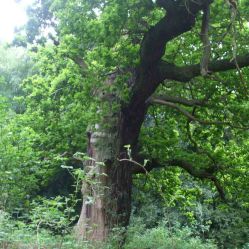 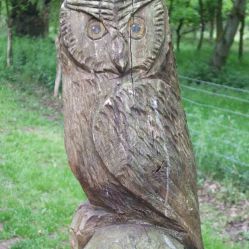 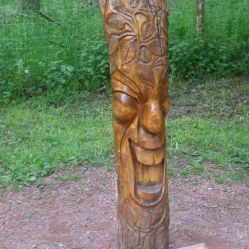 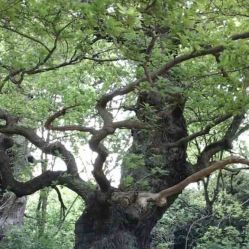 And this is the really ‘Big Man’ of the Forest, The Major Oak:

According to folklore, the Major Oak was Robin Hood’s principal hideout. It is believed to be between 800 and 1000 years old and since Victorian times its great, heavy boughs have been supported by elaborate scaffolding. Whether or not this tree really would have had a trunk sturdy and wide enough for a man to hide inside in the late 12th/early 13th century is debatable – but hey, this is folklore we’re talking about. There could well have been some oak old enough at the time for Robin to have hidden inside.

I’m told that clones of this awesome tree are being attempted through grafting and acorns are also being grown. Apparently, any saplings produced will be sent to various countries around the world.

Next time, I’ll post some photos of the different historical groups and characters we encountered in Sherwood on Bank Holiday Monday. It was certainly a colourful and entertaining day.

48 thoughts on “A Day at Sherwood Forest”