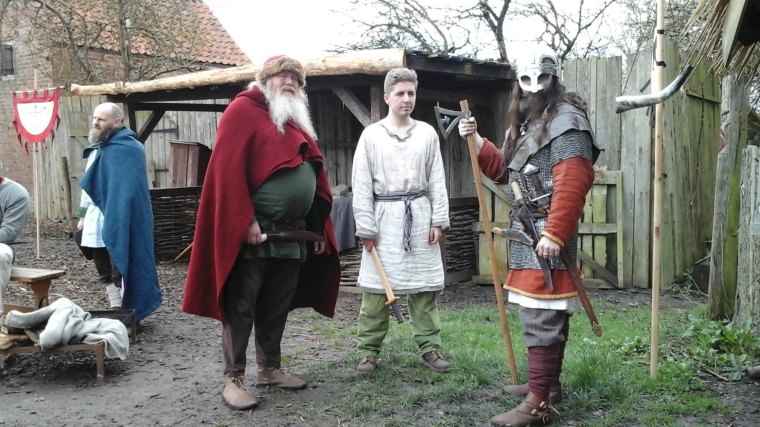 Last Saturday we had a great visit to the Murton Park Viking Village which is on the site of the Yorkshire Museum of Farming just outside of York. Although we took lots of photos of wonderful old farm machinery, this post is not about old farming methods on this occasion. Today I want to focus on Vikings!

The reconstructed Viking village is excellent, and made specifically for the reenactment group who call themselves Jorfor’s Hall. I found out about them on Twitter (@jorforshall). The village is described as a Danelaw Farming Community, and over this particular weekend (9th and 10th April) the Vikings were in residence. This is the entrance into the village:

And this is how the group describe themselves on their website, Jorfor’s Hall:

“Jorfor and his family are hunters and trappers, most of them originally hailing from the Troms area of northern Norway, though they have travelled far across the Viking world, some further than others, and settled in many different lands”.

The group takes part in Viking events all over the country, as well as featuring regularly at Murton Park. Events are tailored for a variety of needs including school parties, youth clubs, fairs, fetes and shows. They also take part at the Jorvik Viking Festival in York in February.

The weather on Saturday morning was a bit dreary to start with, and it was very wet underfoot, but that only served to illustrate the conditions people would have lived with 1100 years ago. Most of the pathways through the settlement were wood-planked, to counteract the mud. This tallies with what I found when doing my research several years ago about the Danish trading town of Hedeby. 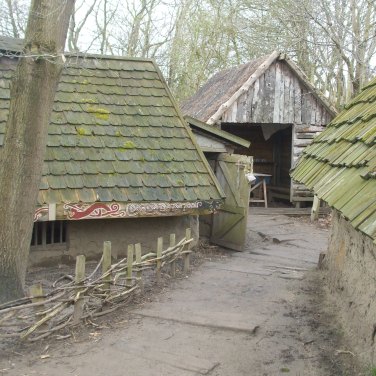 This was the man in charge, the chieftain of the village, wth the very appropriate name of Bear. Thankfully, he was a very friendly bear and told us a lot about the great helmet he’s wearing or holding in these photos, as well as how it compares in battle to the one on the stool. 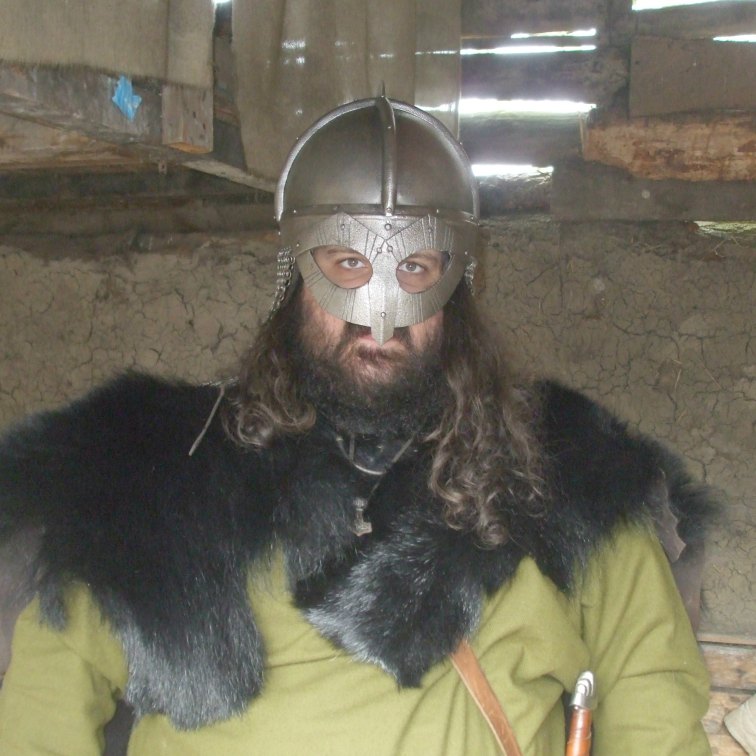 Bear with his helmet 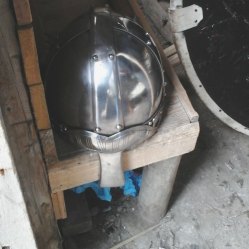 I’d run a mile fast if I saw someone coming at me wearing a helmet like that – and that, according to Bear, was exactly what the helmet was supposed to do: terrify people (especially when the man wearing it was as big as Bear!). The helmet, however, was not the typical Viking style; the more usual design being like the one with a nose guard, shown on the stool. Bear’s helmet is a replica of a famous one discovered in Norway. I think (but I’m not sure) Bear said it was the one found in a 10th century chieftain’s grave at Gjermundbu.

I found this picture of it on Wikimedia Commons.

However, Bear did say that this helmet could be one that had been brought back from the East (trade or raid) and the style was not adopted for long amongst the Vikings. Although the facial shield and eye mask are intimidating to say the least, they could be disastrous in battle. A sword thrust into an eye socket would  direct the sword straight into the eye! With the more usual nose guard, there was the possibility of the sword being deflected away from the eye.

The village itself displays a variety of housing styles and shop fronts, generally from the 9th and I0th centuries. But, as it says on the information poster at the entrance, no one knows for certain what buildings looked like. They were all made of timber, which rots away leaving little evidence. Roofing materials in the village vary from thatch to split tree trunks, wood planks and shingles and some of the buildings are decorated with colourful designs and some some have little gardens: 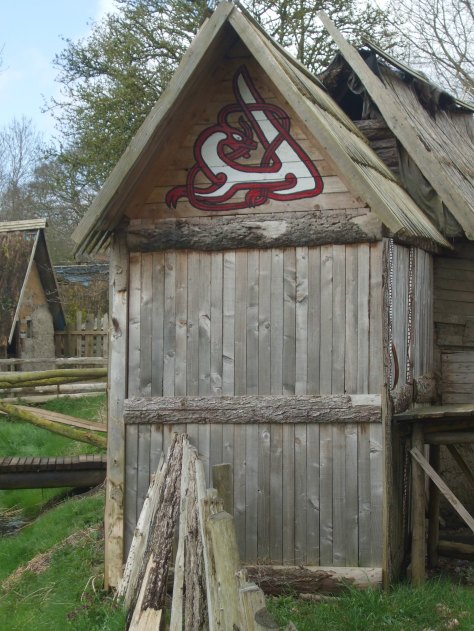 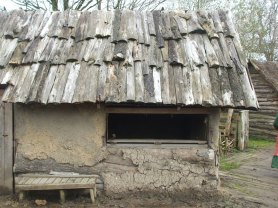 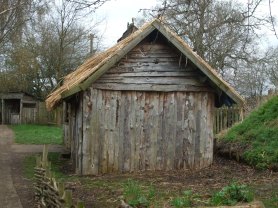 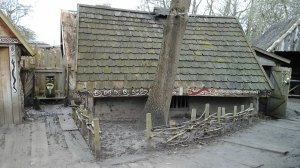 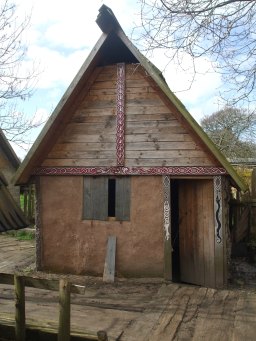 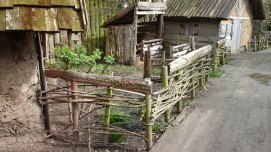 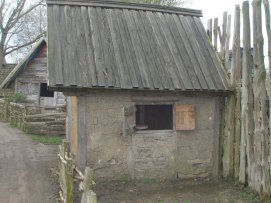 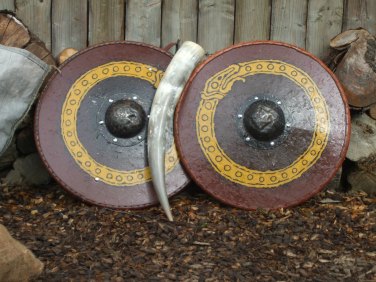 Inside these houses, space was limited and indoor life continued around the ever-present central hearth fire. Every home would have a loom, where women would make clothes, blankets and wall hangings. Storage chests did what storage chests usually do. 🙂 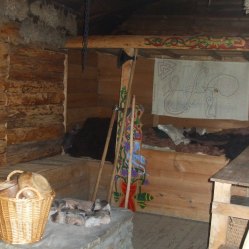 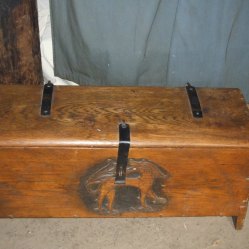 To finish with, these are a few of the villagers themselves, some about their work, others just cooking or socialising. Jobs and trades around the village would be many and varied, and of course, warriors would always be on the alert in case of attack. 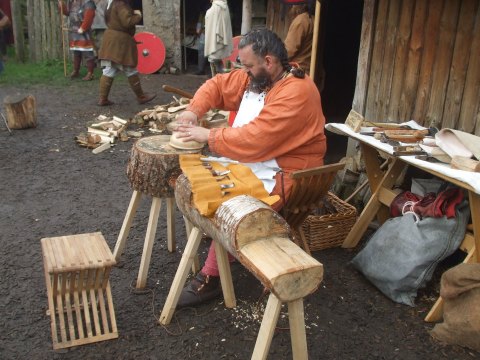 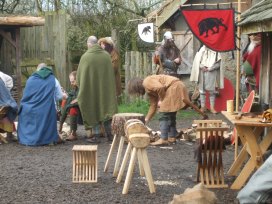 . . . and the cross section through the hull of a reconstructed Viking ship that greets visitors on the way in. It shows how Viking ships were built using overlapping wooden planks (known as clinker planking) which made them waterproof. This technique is still used today in wooden ship construction. It was donated by the Yorkshire Museum.

47 thoughts on “A Visit to Murton Park Viking Village” 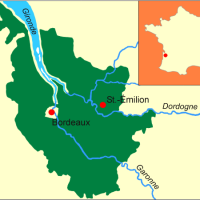