Flash Fiction for for Aspiring Writers is a writing challenge hosted by Priceless Joy. The challenge asks us to write a piece of fiction from the photo prompt provided in around 100- 150 words – give or take 25 words. It encourages participants to comment, constructively, on other entries, so supporting each other’s writing. If you’d like to join in with this challenge, follow the link in the title of PJ’s, blog: Beautiful Words to see what to do. The challenge runs from Wednesday to Wednesday every week.

Here is this week’s prompt, kindly provided by Ellespeth’s friend:

Hot sun, golden sand, warm sea…  What more could a guy want for a week with a gorgeous blonde who just oozed sex appeal? Those curves were enough to send any man crazy.

And ‘crazy’ just grabbed hold of me – and I grabbed Doreen a little too amorously as we frolicked in the surf.  Her bikini top somehow came undone, and pink polka-dots were suddenly floating out to sea.

Doreen’s shrieked profanities needed no amplifier and, not satisfied with that, she proceeded to hammer me with her fists!

Jeers and hoots halted her swings. Belatedly overcome with modesty, Doreen bobbed down, neck-deep beneath the brine. I stared at the group of school lads, their muscles flexed, mocking our one-sided brawl.  But their eyes were fixed on Doreen, waiting to ogle her wading to shore.

Realising her predicament, Doreen’s rage soared. Another swipe knocked me senseless before she swam after her polka-dot top.

The lads were my saviours that day – and I never saw Doreen again.

My bruises faded in a couple of weeks.

For any one interested, here are a few facts I found ( mostly from Wikipedia) about the bikini:

A bikini is a woman’s two-piece swimsuit. The design is simple: two triangles of fabric for the top and two triangles for the bottom. The size of the bikini can range from full pelvic coverage to a revealing thong or g-string design. 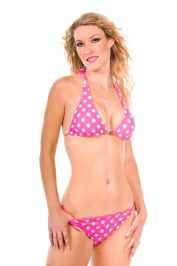 Although we think of the bikini as a relatively recent design,  two-piece swimsuits actually existed in classical antiquity:

The modern design first attracted public attention in Paris in 1946, although a fuller, two-piece swimsuit was not completely unheard of prior to this time:

The actual term, bikini, was coined by Lois Réard, a Parisian mechanical engineer who took over his mother’s lingerie business. He named it after Bikini Atoll, where the testing of atom bombs was taking place. Due to the controversial design, the bikini was slow to be adopted in many countries and was banned from beaches and public places. The Holy See declared the design sinful, but it became part of popular culture when film stars like Brigitte Bardot, Raquel Welsh and Ursula Andress began wearing them on beaches and film sets. I’m sure most of us know of, or have seen, Raquel Welch in One Million Years BC and Ursuala Andress in the James Bond movie, Dr. No.

By the 1960s, the bikini design had become common in most western countries as beachwear, swimwear and underwear. By the late 20th century it was also used as sportswear, e.g. in beach volleyball and body building.

Various styles are common today, from skimpy thong designs to fuller, skirted ones. It’s not unusual on beaches worldwide to see women wearing them with pride – whatever their size.