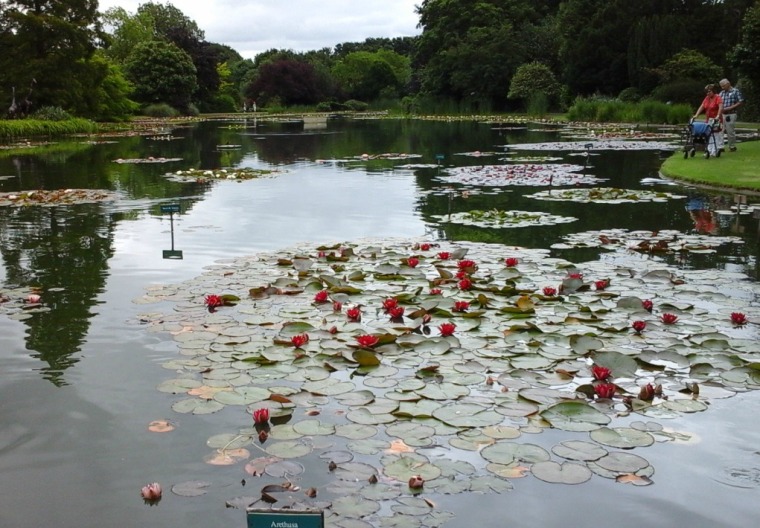 With 2016 racing towards its end I thought I ought to write up about some of the many places we’ve visited around the UK this year. I’ve already posted some of them, as well as a couple of posts about our holiday in Iceland, but I’ve still loads left to do! So I thought I’d start with somewhere we’ve visited twice this year. The first time was in April when trees were only just coming into leaf, and the second in July, when summer flowers were blooming and water lilies patterned and coloured the lakes.

Burnby Hall Gardens wasn’t somewhere we’d set out to visit on our first short break in Yorkshire in April, but we saw leaflets about it in the hotel and thought we’d have a look. And it came as a pleasant surprise. It’s located in the market town of Pocklington in the East Riding of the county.

The Gardens have been described as ‘the jewel in Yorkshire’s crown’ and consist of upper and lower lakes set in nine acres of woodland. There are pathways around the lakes, an ornamental bridge, an aviary, a Victorian garden, a rockery and more recently a stumpery has been added – which I’ll explain about later in the post.

The two lakes are home to a national collection of over a hundred varieties of hardy water lilies which flower between June and August – the reason we visited for a second time in July. The lakes are home to lots of carp and roach which people happily feed with cartons of fish pellets purchased from the shop. The carps’ gaping mouths are very amusing.

When we visited in early April most trees were still bare or just coming into leaf, and blossoms and spring flowers adorned the site. Before I say anything about how the Gardens came into existence, here are a few springtime photos we took: 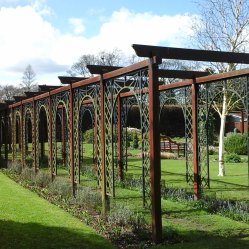 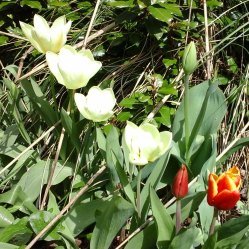 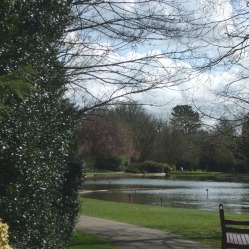 The site of Burnby Gardens was originally the estate of Major Percy Marlborough Stewart (1871 – 1962) who was descended from the earls of Galloway and the Spencer-Churchills and was the godson of the Duke of Marlborough. The gardens were created when Major Stewart returned to settle at home after eight trips around the world, during which he visited every continent except Antarctica. On some of the trips he was accompanied by his wife, Katharine. He is described in the Burnby Hall and Gardens website as ‘an adventurer, traveller, scholar, philanthropist, collector and environmentalist’. His travelling days apparently started after a remark he made to Katharine:

‘We’re terribly dull people, let’s travel round the world and then we shall have something to talk about.’

Many of the cultural and religious artefacts Major Percy collected can be seen in the museum which is housed in the estate’s house.  Many of these have been recognised by UNESCO as being of national and international importance. (I won’t write about the museum here or this post will become far too long!).

On his death in 1962, having no children and his wife having predeceased him, Major Stewart willed that the Gardens and Collection should be left in trust for the benefit of the people of Pocklington.

Here are some of our summertime photos when the water lilies, in particular, were really beautiful – and the reason we decided to go back to Burnby in July: 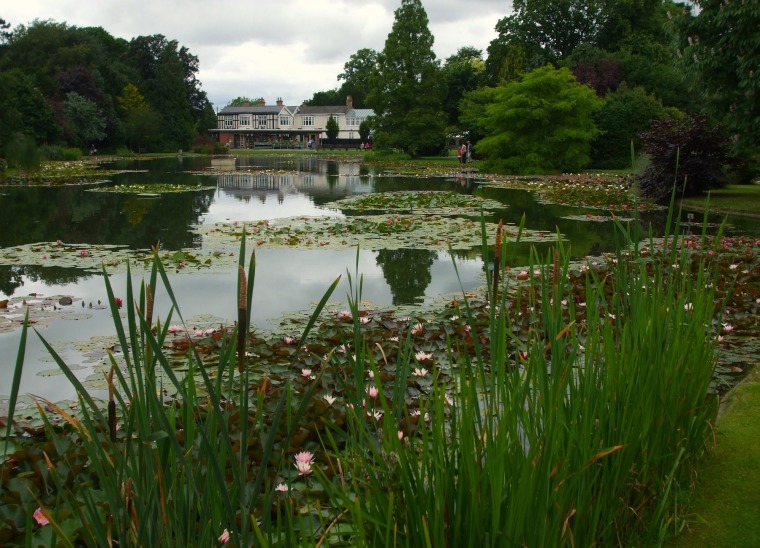 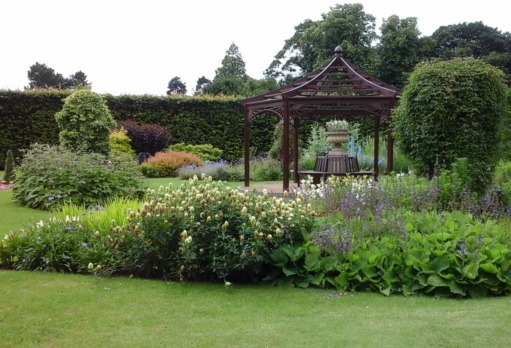 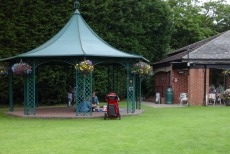 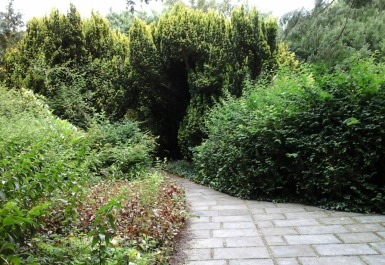 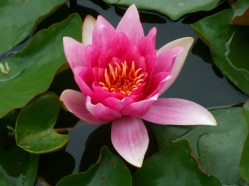 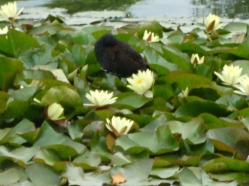 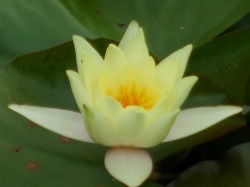 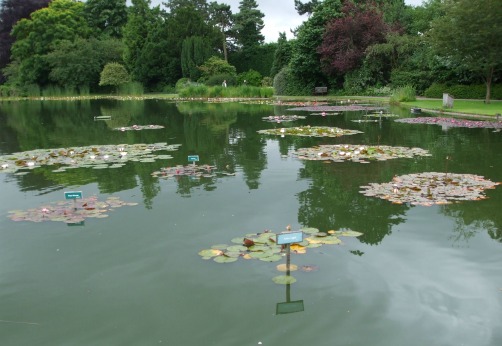 To finish with, a little about the stumpery (taken from an information board at the Burnby Stumpery).

A stumpery is a garden feature constructed mainly from the upturned roots of large trees. The roots are artistically shaped and once in place, plants are used to break up the strong lines and soften the angles. Stumperies have been described as ‘Victorian oddities’ and were popular during the 19th century. The stumpery at Burnby was inspired by the one at Highgrove, the main residence of HRH the Prince of Wales. His stumpery has over 95 sweet chestnut trees and covers 9000 square feet. When his father, Prince Philip, first saw it, he is reputed to have said, ‘When are you going to set fire to this lot?’

Work on Burnby’s stumpery started in 2011 with the removal of 40 dead wych elms (dead as a result of Dutch elm disease) and general clearance of the site. Soil bunds were added to give the stumpery some height. A large quantity of oak stumps were provided by a local Wilberfoss timber agent and the Hobbits’ house in the centre was added for interest.

Environmentally, the stumpery provides for many different species of flora and fauna. Amongst many others, the flora includes many ferns and spring bulbs. Amongst the fauna are grey squirrels, shrews, hedgehogs and occasional rabbits and foxes. Many insects, spiders and snails also make their homes here and the log-like cabins provide excellent ‘bug hotels’ and habitats for hibernating fauna.

This a plan of the stumpery (from the same information board.)

… and some photos which are a mixture of ones taken in both April and July. There were quite a few little Green Men around, too. 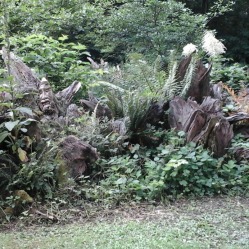 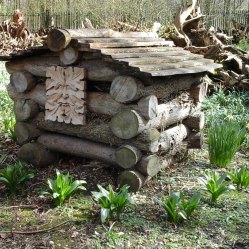 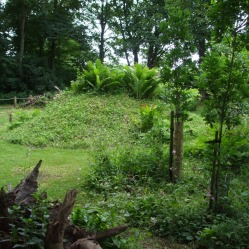 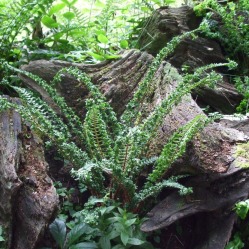 28 thoughts on “Burnby Hall and Gardens”