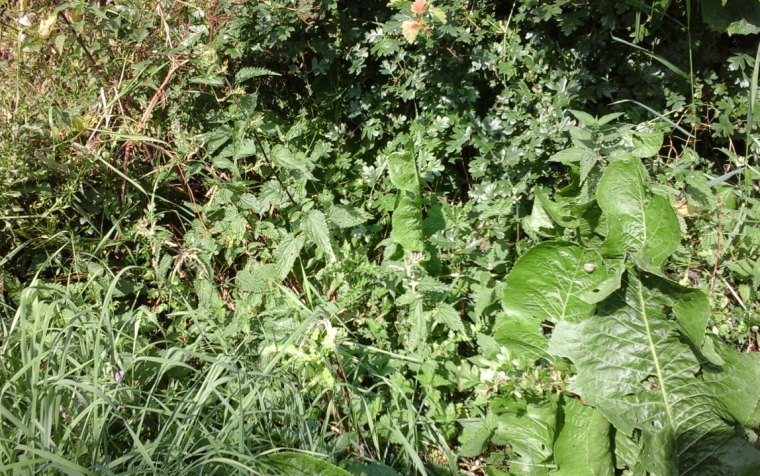 Today has been a lovely warm, sunny day here in the UK – at least in the small part of it where I live in Nottinghamshire. While I was out on my walk this morning, I was reminded of a couple of photos I took last week. I was actually taking photos of the local cereal crops (another post I need to do!) when I spotted clumps of stinging nettles and, of course, growing alongside them were clumps of dock leaves.

As children we grow up knowing that if we get stung by a nasty old nettle, we immediately get a dock leaf and rub it on the affected area, which by now will have started coming up in horrid little lumps and not feel very nice at all. I can’t tell you how many times I’ve been stung by nettles – even fallen into a patch or two as a child. And thank goodness for the good old dock leaf!

Well, today I started thinking about three things: exactly why do nettles sting in the first place, why are dock leaves the perfect antidote for the sting and how come these two plants are always found growing together anyway?

Like many of us, I knew a little about this, and thought I’d look up a bit more once I got home. So here it is.

Most of us will have guessed that nettles contain some kind of chemical that seriously irritates the skin. We may also have thought that dock leaves contain another chemical which, when released as the leaf is crushed by being rubbed against the skin, will neutralise the painful sting of the nettle – an idea that is no longer accepted (as mentioned later on).

But, to gain any relief from the dock leaf, old folk lore tells us we should cite this rhyme during the rubbing process. (Personally. I don’t think this will help at all, but you’re welcome to try for yourself! Lol)

The stinging nettle is native to Europe, Asia, northern North Africa and western North America. It has also been introduced elsewhere due to its many beneficial uses, which I won’t go into in this post. It is an herbaceous perennial, meaning that it grows back in the same areas year after year. As for why nettles sting, chemists aren’t exactly sure which chemicals are in the venom, but histamine, acetylchlorine and serotonin are present, and possibly formic acid.

Nettle leaves are covered in tiny needle-like hairs called trichomes. When we brush against them them, they break off and penetrate the skin, releasing a cocktail of chemicals into the base of the hair, so causing the sting:

It stands to reason, then, that something containing an alkaline substance would neutralise the effect of the sting. It was previously thought that dock leaves worked for that very reason but now we know there is no scientific evidence that they work by neutralising acids. Dock leaves are not alkaline, as proven by simple Litmus tests.

Dock leaves may soothe nettle stings for a few other reasons. Firstly, simply by rubbing the dock leaf over the sting we spread the acid over a bigger area which reduces its effects. Secondly, rubbing the area releases sap from the leaf, which also produces a soothing effect. Thirdly, it is thought that actually rubbing the area causes other nerves to lessen the signals of the pain-sensing nerves, which may reduce the pain sensation further.

However, there are some species of dock leaf that don’t work, including yellow dock and red dock. This is yellow, or crispy dock:

Unfortunately, I can’t find any copyright-free images of red dock to show so here’s a link to Google images: Red Dock

Dock leaves have helped many generations of people to counter the effects of nettle stings, and there is little doubt that they do. But it is now thought possible that rubbing the skin with any kind of leaf will have the same effect.

In the past, dock leaves were often called Butter Dock, simply because farm-made butter was wrapped in long, broad leaves to keep it cool while it was being transported to market. In Chapter 8 of her novel, Adam Bede, published in 1859, George Eliot refers to this through the words of Mrs Poysner:

” Molly,” she said, rather languidly, “just run out and get me a bunch of dock leaves; the butter’s ready to pack now”.

As for my last question about why nettles and dock leaves always grow together, it seems to be just a coincidence. Both plants are early colonisers and will quickly move in and spread in any area of waste or neglected ground.

To finish, here’s the first few lines of a poem by William Barnes (!801-1886). Note how he makes use of that odd little rhyme I quoted above:

The dock-leaves that do spread so wide
Up yonder zunny bank’s green zide,
Do bring to mind what we did do
At plaÿ wi’ dock-leaves years agoo:
How we,–when nettles had a-stung
Our little hands, when we wer young,–
Did rub em wi’ a dock, an’ zing
“_Out nettl’, in dock. In dock, out sting._”

Nettle tea, just one of the many, varied uses of nettles:

34 thoughts on “A Perfect Relationship”