Last June we had a few days in Chester, mostly to visit my aunt and uncle in North Wales but also to visit some of the castles along the North Wales coast. We managed to do all that, and I posted three ‘castle posts’ once we got home, as well as one about Bodnant Gardens. We were staying at a hotel in Chester, so we also spent one of our days in the city – but I never did get around to posting about it. So today I’ve duly written it up.

Chester is located in the county of Cheshire in the north-west of England, south of the River Mersey and the much larger city of Liverpool. The River Dee flows through it in its way to the Irish Sea:

Chester’s a lovely old city, with evidence of settlement throughout various periods since Roman times. The town centre is known for its many ‘black and white’ buildings and galleried shops, or the ‘Chester Rows’.

There is a lot about this city I could talk about – including the Anglo-Saxon period and the medieval castle and city walls . . .

In the ‘Dewa’ Roman museum, there are cellar remains showing settlement at various levels/strata – through Roman, Saxon and later medieval periods. Buildings around the city also provide evidence for these periods, as well as later times.

But today I want to focus on the Roman settlement at Chester (Deva or Dewa).

Dewa/Deva stood on a ridge of red sandstone in a loop of the River Dee. This photo shows a ‘cut’ through the ridge for the Chester – or Shropshire Union – Canal:

The settlement began life as a mostly wooden fortress built by the Second Legion, Adiutrix, in AD 70, and was named after the local name for the goddess of the river, Dewa. The site was perfect for several reasons. It controlled the newly occupied and hostile areas of the Welsh as well as those of Northern Britain, and the River Dee was navigable up to the sandstone ridge, providing good harbour facilities and good protection on the southern and westerly sides. It is also possible that the fortress was intended as a supply base and embarkation point for the intended conquest of Ireland.

At the end of the 80s, the 2nd Legion was sent to Germany and the Twentieth Legion, Valeria Victrix, moved into the fortress:

The Twentieth replaced the wooden buildings with stone and stayed in the fortress until the 5th century.

Here are some photos of some of the artefacts, plus a few replicas, of Roman items we saw on display at the Dewa Roman Museum: 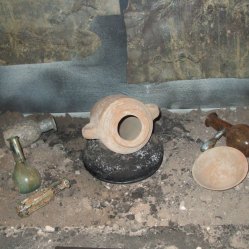 Deva had the typical ‘playing card’ design of all Roman forts. The outer edge was a tall, thick stone wall, five courses high, and with four gatehouses to enter:

Outside the fortress wall, as well as the civilian settlement (canabae/vicus) were a bath house and an amphitheatre. Evidence of the amphitheatre was first discovered in 1929 but it wasn’t until 1993 that excavation work started on it. To date only half of it has been excavated. It is thought to have been the biggest amphitheatre in Britain and seated 7,000 spectators. There were four entrances, the main one being on the northern side. 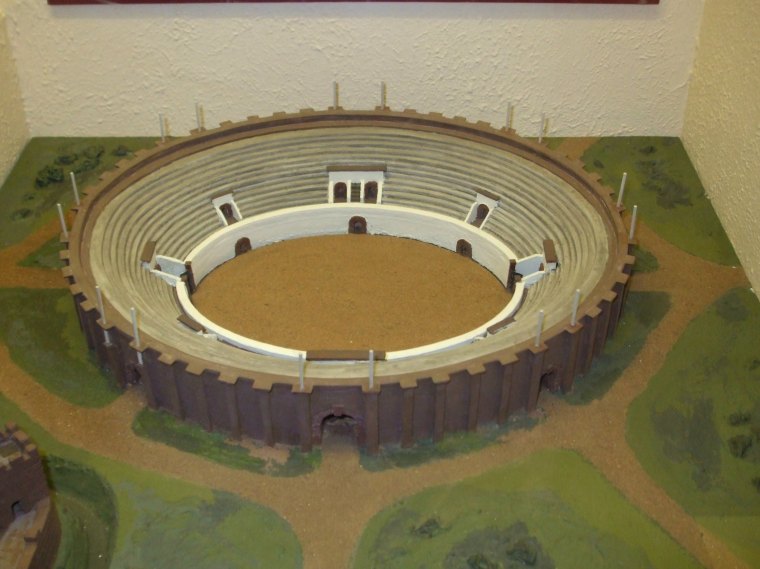 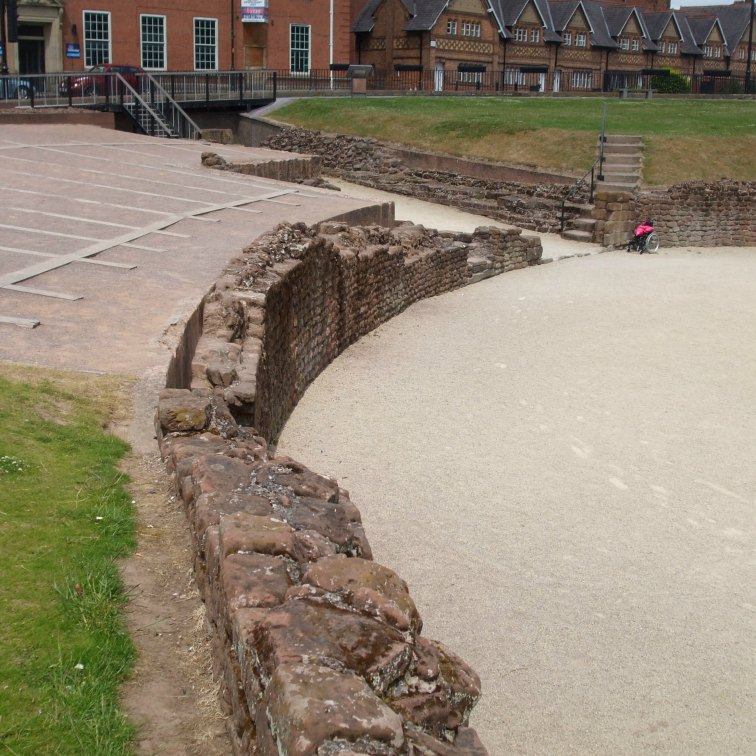 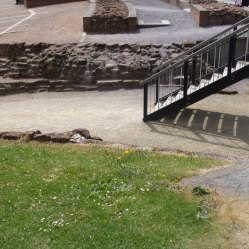 A small room at the east entrance may have held the beasts – which would most likely have included stags, bulls and bears, not the lions and elephants etc seen in Rome.

A shrine to the goddess, Nemesis, was discovered beside the north entrance and an altar dedicated to the centurion, Sextius Marciano. The walls of the arena were painted a reddish brown to give a marbled effect and the arena floor was covered in yellow sand to stop combatants from slipping. It could also be easily cleaned.

Gladiator fights were popular and aroused great passions. Gladiators were often prisoners of war or condemned slaves reprieved from execution and specially trained. Combat gave them a chance to win a ‘new life’ by showing skill and courage. The killing of beasts would have reinforced the belief in man’s dominion over nature – important in a world in which wild animals still posed a real threat.

All in all, Chester is well worth a visit. Many tourists also come to see Chester Cathedral, too, which belongs to the later medieval period. Built of the local red Triassic sandstone it was opened in 1541.

Here are some photos of the cathedral to finish with:

42 thoughts on “A Look at Roman Chester” 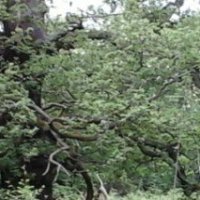 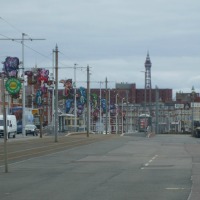