Flash Fiction for for Aspiring Writers is a writing challenge hosted by Priceless Joy. It asks us to write a piece of fiction from the photo prompt provided in around 100-150 words – give or take 25 words. It encourages us to comment, constructively, on other entries, so supporting each other’s writing. If you’d like to join in with this challenge, follow the above link to see what to do. The challenge runs from Tuesday to Tuesday every week.

Here is this week’s prompt, kindly provided by Graham Lawrence: 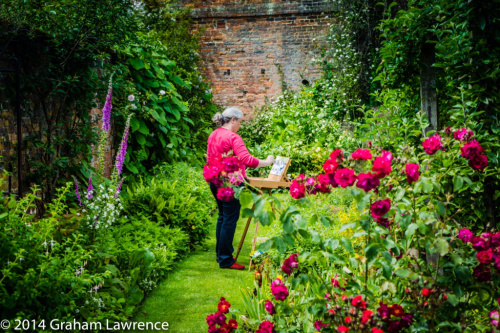 And this is my story:

Jessie bobbed a curtsy. ‘’Scuse me ma’am, but the master asked whether you’d be attending the dinner party this evening.’

Lady Howarth wrinkled her nose and wiped her paintbrush down her long skirts. ‘It depends on how long my friends keep me talking, Jessie: they’re awfully chatty. If I am busy, he must carry on without me.  Mrs. Williams can be hostess instead.’

Jessie stifled a giggle at the thought of the crusty housekeeper chatting with influential people whilst the mistress entertained her imaginary ‘friends’ in the garden.

Lady Howarth swirled her paintbrush around a sticky pink blob on her canvas, intended to resemble a delicate peony on the nearby bush. ‘Monsieur Monet tells me that even Queen Victoria likes my work …’

A year had passed since the carriage had overturned, leaving Lady Howarth with the mind of a child. After the meeting tonight, the mistress would be admitted to the asylum – rendering the wealthy Lord Howarth quite free: as Jessie had planned the day she removed the pin from the carriage wheel.

The lovely garden in Graham’s prompt reminded me of the walled gardens in the grounds of the many English stately homes that I’ve visited. Consequently, I set my story in Victorian times. I haven’t the time this week for much of an ‘Extra bit’ to accompany my story, but here’s a little snippet about walled gardens:

Perhaps one of the most famous walled gardens in literature features in the novel, ‘The Secret Garden’.  I read this story many years ago and can remember little about it – so perhaps a re-read is due. But I do remember the main character: a young girl (a child) finding her way into an abandoned and totally overgrown walled garden and tending to it – and it completely changed her life, easing the misery of her loveless upbringing.

Essentially, the walled garden was something that many big and affluent houses had, mostly for growing fruit and vegetables for the use of the family living there. Some we’ve visited still grow really old varieties no longer heard of the shops or markets of today. It’s interesting to see how some of these old varieties differ to the modern ones. Sections of the gardens were generally devoted to flower growing too, to adorn the halls and stately rooms and impress the important guests.

Here’s a definition of a walled garden from Wikipedia:

“A walled garden is a garden enclosed by high walls for horticultural rather than security purposes, although originally all gardens may have been enclosed for protection from animal or human intruders. In temperate climates the essential function of the walls surrounding a walled garden is to shelter the garden from wind and frost,  though they may also serve a decorative purpose”.

The walls were very important, some even having built-in heating systems:

The hollow wall idea involves a hollow wall with openings in the stonework on the side facing the garden. Fires could be lit inside the wall to provide heat to protect the fruit growing against the wall, such as espaliers. Heat would escape into the garden through these openings. Smoke from the fires would be directed upwards through chimneys or flues.

This is what an espaliered fruit tree looks like:

I would have liked to have written about the dreadful asylums, which were still in existence until the 1960s, or even later. Perhaps I’ll do that another time . . .